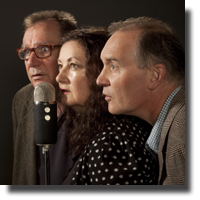 When Samuel Beckett was asked what he thought of this radio play, he replied that it had weaknesses, not in the production, but in the writing. It's only been half a century later that the Estate of Beckett allowed this radio play to be produced as theatre, first in London, then in New York, and now, the Canadian premiere here in Vancouver.

However, I do agree with Beckett that this play is flawed and I also agree with him that it should not be produced as a stage play. Beckett throughout his lifetime kept on refusing requests to make it a stage play. And from my point of view, I totally agree. This play should have remained a radio play, but even as that, I again agree with the playwright that it was a weak play.

The actors, however, were marvelous, with their well-enunciated Irish accents and jargon, because that's how the author wanted it to be.. But if you have a weak play, no matter how good the actors and the production are, well, you can guess the answer.

The positive aspect is this is indeed a rare and breakthrough opportunity to see this play by one of the most influential dramatists of the 20th century making its Canadian premiere in Vancouver.