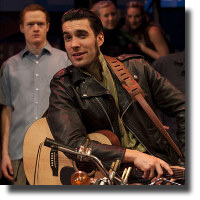 Gateway Theatre in association with Chemainus Theatre Festival
All Shook Up by Joe DiPietro, inspired by and featuring the songs of Elvis Presley

You don't need to go to Broadway and spend more than a hundred dollars to see a musical. We have them all here in BC, and a good example of a professional production is this one. Mostly composed of members of the Canadian Actors' Equity Association, this production directed by Artistic Director and Playwright Simon Johnston is superb in all its aspects: the adaptation of Shakespeare's 12th Night by playwright DiPietro, the acting, singing and dancing of these energetic actors, the set design, the 1950s costumes, the songs popularized by Elvis Presley--all these got the audience riled up and a standing ovation during opening night.

Johnston gave his farewell address at the beginning of the show. After 12 years as Artistic Director, he is finally throwing in the towel. In his programme notes, Johnston says that this play which ends the 2011-12 season of Gateway, was chosen because it's "a musical about the power of music to transform people for the better". Twenty-five Elvis Presley hits serve as the blueprint for this show, including the Elvis classics "Jailhouse Rock", "Love Me tender", "Don't Be Cruel", "Heartbreak Hotel", and many others.

It’s 1955 in a “so-small-you-never-heard-of-it” town. Uptight Mayor Matilda (Cheryl Mullen) has outlawed most kinds of fun, including tight pants, loud music, and public necking. Citizens are itching for a little less regulation and a little more passion, and they get it when a roustabout named Chad (Gaelan Beatty) rolls into town in need of a mechanic and he's introduced to tomboyish Natalie (Karyn Mott), who is instantly smitten as she sings "One Night With You" . What a talented actress...such a vibrant and commanding voice!

The other singers/actors that impressed me were Luisa Jojic transforming herself from the prudish Museum Director to the bombastic and passionate lover. Joel Ballard also came out strong as he transforms himself from the timid nerd to a ball of energy. The ensemble provided a lot of variety in song and dance, and gave a hefty vibrancy to this production. The mise-en-scene is reminiscent of the different levels in Shakesperean staging, and the costumes were faithful to the 1950s ambience.

This "jukebox musical" opened at the Palace Theatre in Broadway on March 2, 2005 and closed on September 25, around six months later, with 213 performances. It still is a popular musical and continues being presented in regional theatres and schools in the USA and Canada.

Whether you're an Elvis fan or not, this is a truly entertaining production. It's oodles of fun and you'll be laughing and clapping all the way through.