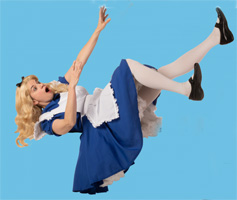 Ready to fall down The Cultch and Theatre Replacement’s rabbit hole filled with energy, laughter, and creativity? The East Van Panto’s novel production of Alice in Wonderland provides exactly this with their adoption of the classic fairy tale to the bohemian vibe of B.C.’s artisan community.

Attended by theatre lovers of all ages, the Panto tradition has become a highly anticipated East Van holiday event. It is presented in the heart of the community at the York Theatre that is quaintly nestled within the vibrancy of the Drive. On opening night, the excitement and pride of the local community was in the air as they lined up to experience the first in person Panto since the pandemic started.

The Panto was an interactive event where the audience participated with the cast. For example, they booed the villain or screamed responses in unison to defined catch phrases used by the actors. This heightened the audience’s attention as they were captivated from start to finish in playing along.

This original script was filled with wit, humour and creativity. It played on references to East Van such as the two similarly sounding restaurants Café du Soleil and Café Deux Soleil. As a viewer, it instilled pride in terms of the local writing talent that is offered by our local theatre community.

The acting and singing was executed through an obviously experienced cast who each played their eclectic characters delightfully, whether they were the White Rabbit, Queen of Hearts or Alice. Each character complemented the other and their range of vocals that were sung through the various tunes was brilliant.

The soundtrack was very effective as each song’s tune was well known with customized lyrics geared to the storyline. The range of songs from Frozen’s “Let It Go” to the Spice Girls’ “Wannabe” was a smart choice as it appealed to the audience of all ages. The score was played live by two musicians that were directly on stage, so it added another level of authenticity compared to pre-recorded tracks.

The costumes and set truly brought the psychedelic feel of this fairy tale to life with the vibrant colours woven into the outfits design and the backdrops of the stage. The set incorporated different aspects of the local community including Vancouver’s Skytrain and landmarks like the Rio Theatre. This provided a personalized feel to the experience as the audience recognized the references to local spots.

If you’re looking for a fun and safe holiday event during these unprecedent times, I highly recommend making a night out of dining at one of the Drive’s delicious restaurants and then heading over to the York Theatre to experience this year’s Panto!