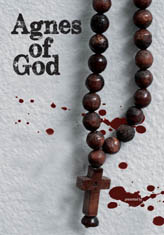 Amazing actors! Paula Spurr (Mother Superior), Annie Arbuckle (Agnes), and Tiffany Markwart (Dr. Livingstone) captivated the audience during its first matinee performance last Sunday. You could hear a pin drop as these three performed their best in the intimate venue meant for this kind of play.

I congratulated Director and President of Alchemy Theatre, Matthew Davenport, with a thumbs up at the end of the performance. The audience as they lingered in the lobby had all praises for this production. Davenport is indeed a talented director. He did a very innovative mise-en-scene of Shakespeare's Midsummer Night's Dream last summer, which took in a lot of actors. So, whether you have 20 actors or three,Davenport delivers.

During intermission, he mentioned that the Company will go full blast in the 2016-17 season with a repertory of four plays. After officially forming their own theatre group in the spring of 2014, Alchemy Theatre staged their inaugural summer theatre production of Twelfth Night at The Bernie Legge Theatre, They brought summer theatre back to The Bernie Legge Theatre for a second time with William Shakespeare’s A Midsummer Night’s Dream.

Kudos to the actors and production staff for a splendid afternoon of theatre!