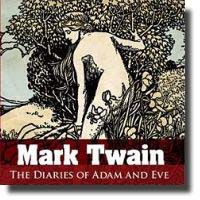 Adapted by David Birney and directed by C.W. Marshall, Twain's witty insights into the complex relationships between human beings, are delightfully acted by Tariq Leslie (Adam) and Alicia Novak (Eve) in this 70-minute play.

Based on the creation of the first humans, Twain takes a comic look of how Adam meets Eve in the Garden of Eden, and how they are expelled from their Paradise home because of Eve committing the first sin of disobedience--eating the forbidden fruit.

Twain uses diaries written by the two as they write about their thoughts and feelings. After they are driven out of Eden, the diaries continue until they have Cain and Abel and more children afterwards, and finally, the death of Eve.

I particularly liked the last scene when Eve exited leaving Adam alone again just as he was before Eve was created. I also like the strobe and sound effects after Eve took a bite of the apple, although I think the thunder sounds were a bit too long.

Two other plays are presented in this first annual summer repertory festival of ETC, Women Beware Women and The Farnsworth Invention, until August 10th at the JAC.