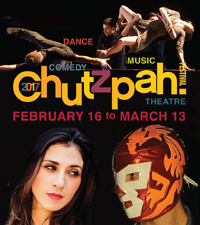 Aaron Davidman’s Wrestling Jerusalem is a well written single handed show about the conflicts in the Middle East. If you feel like you have already heard enough on this subject, you just might be agreeable to take in Davidman’s more humourous autobiographical story-telling at the Norman & Annette Rothstein Theatre.

Wrestling Jerusalem is part of The Lisa Nemetz International Jewish Performing Arts Festival – more popularly known as Chutzpah! It’s the only show at this year’s festival that falls in the theatre category. Even then, it draws elements of a political lecture and stand-up.

The project has taken nearly a couple of decades in the making that includes several trips to Israel (though condensed into one for the end product). While is not clearly evident where Davidman’s own convictions lie on Israeli-Palestinian relations, his aim appears to offer an even-handed viewpoint where everyone is right, and yet everyone is wrong.

Director Michael John Garcés steers the show at an oddly frenetic pace, starting with a rapid history lesson on Israel’s struggle to attain peace and security over its seven decade existence. After a hackneyed “Rabbi walks into a bar” joke, the show mostly consists of fragments of two-way verbal exchanges. Davidman switches from one character to another offering little delineation that helps his audience clearly identify many of the Middle East characters - Israelis or Palestinians.

Fortunately, while many of the writer’s inchoate characters are monochromatic, a few are engagingly colourful: Tariq, a sermonizing Muslim, Ibrahim, a hard-nosed Palestinian forced to give up his land for a West Bank blockade, and Amir, a pot-smoking Israeli youth who has seen too much violence for his own good.