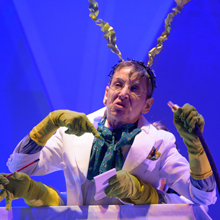 The Alberta Theatre Projects production of In Wonderland is a stage adaptation of Lewis Carroll’s novel Alice in Wonderland. Only three actors are tasked with portraying many of characters we have come to associate with Carroll’s famous children’s story. The trio is led by the youngest performer, Filipina- Canadian multidisciplinary artist Sarah Roa, who plays Alice throughout the entire show.

Natascha Girgis and Graham Percy play all the other characters with varying degrees of postulation and panache. Percy displays his versatility in roles as disparate as Charles Dodgson (who ultimately took the pseudonym of Lewis Carroll), the Mad Hatter and White Rabbit. Natascha Girgis took on the dormouse, the Queen of Hearts and half of a rather creepy Cheshire Cat. Girgis and Percy don’t look alike, so alas, there were no Tweedle-Dee or Tweedle-Dum featured.

In Wonderland is not a musical by any stretch, nonetheless the audience does benefit from what seems an impromptu rendition by Natascha Girgis of Straighten up and Fly Right and a wacky version of Anything Goes that does at least fit with the tea party scene.

Sarah Roa portrays Alice as a young adult rather than a child, but her militant and mordant performance seemed to fit with the expectations of children in the audience. Anna Cummer’s vision of this family classic combines live action, puppetry and ingenious video projection. Jamie Nesbitt’s dazzling projection design makes up for some of the show’s lesser elements. The scene where Alice falls down the rabbit hole is brilliantly done.

The play is bookended with scenes of Alice spending a typical English Summer afternoon with her sister and Charles supported by real-time video of a flowing river. Cummer’s adaptation is largely faithful to the original and generally targets the whole family – with the possible exception of very young children.