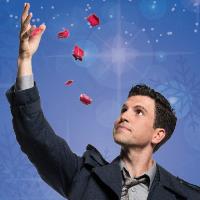 Peter Jorgensen’s new stage musical adaptation may provide some astute timeline adjustments and allow for an expanded role for the guardian angel, but is, by and large faithful to Frank Capra’s original film version. It even begins with a sincere homage to the film, that had James Stewart playing everyman unsung hero George Bailey, with movie-style opening credits.

It is easy to see why the story has endured; it is one of hope and redemption and regardless which number is on the life insurance policy, a good man will always be worth more alive than dead.

George’s story is known by just about everyone who has had time to watch television for a couple of hours around each Christmas for the past fifty years. Essentially, it’s about a regular guy in a small town, who unselfishly puts family responsibility and the well-being of his neighbours ahead of his own aspirations. So where is the conflict? Well, not everybody in Bedford Falls shares George’s philosophy. Local misanthrope Henry Potter would like to take over George’s Building and Loan Company. But instead of serving the community, it would serve him.

None of the music chosen to embellish the production has been expressly written for the show. Though, Nico Rhodes has done an excellent job re-arranging and orchestrating the tunes to suit the talents of a large cast. Many of the songs, including three traditional carols were written well before the film’s commercial release in 1946. So while the songs do not help drive the narrative, tunes like Ira Gershwin and Kurt Weill’s “One Life to Live” get shoe-horned into a contrived context. The exception is George Gershwin’s masterpiece Rhapsody in Blue – played with virtuosic musicianship by the orchestra led by Angus Kellett. The tune has long been inspirational for popular culture, although, more evocative of urban images than a place like Bedford Falls.

Nick Fontaine puts in a bold performance as the longanimous George Bailey. Initially, as an impulsive young man in the first act, then as the world collapses around his character in the second act, the desperation really shows through. Greg Armstrong-Morris charms the audience with some much-needed gung ho humour as Angel Class II Clarence. In a departure from the original and even from previous stage mountings, he is omnipresent on stage, though only visible to the audience, during the first act. Artistic director Jovanni Sy gets to show off his acting versatility in opposite ends of the personality spectrum as the kindly elder Bailey and the curmudgeonly Henry Potter.

The rest of the hardworking cast moves in and out of roles as the benevolent townspeople. The younger members of the cast manage to steal most of the scenes and maintain the story’s heartbeat.

Peter Jorgensen’s adaptation of It's a Wonderful Life makes for an excellent choice for the whole family. What it may lack in dramatic effect, it at least partially makes up for with pizzazz.