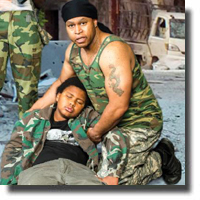 The first striking thing about United Players current production is the length of the cast list – 26 characters, most of them with long Greek names.   Can the playwright possibly control so many and make it intelligible for a modern audience?  Can United Players rise to such an ambitious challenge?  The answer to both questions is a resounding’ yes.’

This is an extremely skilful play. It is straightforward and classical in structure, contemporary and intelligent in dialogue, populated with strong, individualized roles, and it engages in discussions of many of our modern worlds intractable problems. It certainly makes demands on the audience but in my view, lays out its ground rules very clearly. Brian Parkinsons direction is clean and thoughtful with few lapses in energy or over emotion, light touches of humour and a sure arc.

The setting is somewhere in the 21st century,possibly in Africa. After a civil war in which gruesome atrocities were inflicted by both sides, a female leader is now in power and seeking economic assistance from a more powerful state. Allusions to Rwanda and more specifically Liberia and Ellen Sirleaf Johnson are not far to seek. Even hints of Aung Sung Su Kyi are included by United Players decision to use a multi-cultural cast. The names of the places and most of the characters though are taken from the ancient Greek poems and dramas on the mythical history of Thebes and Athens. These ancient tales are completely inter-woven into the contemporary plot, though not always with the same endings.

Theseus of Athens (Jordon Navratil) is the civilized and prosperous leader who arrives in Thebes to conduct negotiations with Eurydice, President of Thebes (MariaLuisa Alvarez). She is Creons widow, but although she makes a huge political mistake, she does not commit suicide as in Sophocles play. Theseus own mythical tragedy plays out in full via increasingly frantic cell phone calls to his wife Phaedra, sharpening the already acute tensions of the modern plot.

Jordon Navratil is so much the embodiment of charming, politician and petty human being, that his eventual break-down is all the more affecting. Both Morgan Churla as his PA, Talthybia, and Sean Anthony as his aide give life to the familiar members of a political entourage. Anthony is particularly good in the second half.

MariaLuisa Alvarez (Eurydice) is enchanting, intelligent, warm, humane, and passionately headstrong. Strong support comes from her cabinet ministers, especially Mandana Namazi, Wynn Siu and Claire Pollock, the ministers of Foreign Affairs, Finance and Justice. (It cannot be coincidence that their names, Aglaea, Euphrosyne and Thalia, are those of the three Graces.) Together they bring humanity and intelligence and nerve to the political issues under discussion.

There are also solid performances from the Military (Rosemary F. Manso, Broadus Mattison and Solomon Irama.

Opposition to the government side is led by PrinceTydeus (Rema Kibayi), amusing and showy, and Pargeia (a feisty Marion Landers). Neither quite fitted into the rest of the play.

As the diplomatic negotiations begin to collapse, Eurydices family play out their own Sophoclean drama. Antigone (Kaylin Metchie) and Ismene (Olivia Poon) argue fiercely over the rights and wrongs of burying their brother, the warlord Polynices. As in the original, Eurydice has insisted his body should be left to rot. Haemon in his modern incarnation is still in love with Antigone, but he is cast as a medical student, blinded while clearing mines. (There is a lot about blindness in this play, and masks). Adam Beauchesne is completely charming and Antigone and Ismene both vulnerable. Their story ends in hope and not death.

Despite the public tragedy which occurs as the many threads of the play come together, Buffini departs from Greek tragedy to end less finally: I hope that when our battle's done / We'll see each other / Masks off, as ourselves / ....Perhaps we'll risk our trust.

Well-designed lighting by Graham Ockleyand pertinent and varied costumes from Lisa Sadler underpinned the production concepts. The set, while minimal and useful, was uninspiring.

Buffini has used the psychological rawness of Greek myth to counter our over-familiarity with the atrocities of warfare and produce a very moving piece of theatre. One leaves the theatre with the feeling that ancient myths can still say something about modern times but also that those ancient heroes might find themselves in us. Perhaps, as the Thebans say to Theseus, we can learn from Athens, and Thebes, mistakes.