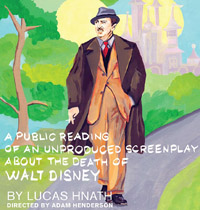 Walt Disney, purveyor of princesses and friendly dwarfs, translator of dark wonder tales into comfortable domestic values - what was he like in private? As he tells us in the opening lines of this purported autobiography, he is "quick and smart and sharp and great, and rich and loved". But of course, this is not an autobiography or even a biography but a lyrical, elusive play by Lucas Hnath concerned more with fantasy and deception than facts.

We begin after the animation glory days with Walt (Paul Herbert) casting around for something important and more `real'. These are the nature films.Walt thinks they will bring real life to people without the hassle of, say, actually climbing mountains; "because, who has time?" the problems of truly tackling nature will simply not appear. Real problems do occur during filming when lemmings fail to behave 'naturally' and refuse to leap over a cliff in droves. With Walt enthusiastically backing brother Roy's proposal, and Roy's inexperienced son producing the film, the lemmings are hurled over the cliff. Years later, when animal cruelty itself becomes a problem, Roy and Roy's son will take the blame.

Real life also intervenes with a union strike. Roy backs the union’s position, and ultimately fixes things for Walt, at the cost of blackening his own name while praising Walt’s.

Turning from nature to urban life, Walt envisages a new, utopian city and begins to build what will become EPCOT, circumventing Florida's property laws easily and bull-dozing his way past his Board who want another theme park, not a functioning city. It will be a perfect place with no problems for anyone, where people can live forever (though as Roy observes, under Walt's governance there will also be no choice). It's not far from this thought that Walt decides to be cryogenically preserved - just his head, you understand.

As the title suggests, the play is presented as a reading, all four actors sitting at a long table, binders open, the table cluttered with water glasses, a mic and a slide projector. All the screen directions are read aloud by Walt,a repetitive "cut to' punctuating every scene and dictating its rhythm. A series of scenes passes from Disney's work through his diagnosis of lung cancer, his family relationships, his illness and his final, incandescent apotheosis. On the way they expose his character, quick and smart, yes. But loved? Dictatorial, uncaring, self-centred, controlling and cruel, Walt intentionally inflicts both physical and mental pain on his unflappable brother, Roy, delicately underplayed by Brian Parkinson. He sneers at his not very clever jock of a son-in-law, (Ryan Trieus), manipulates him into betraying his wife and, as with Roy, sets him up to take a fall. His daughter (Chelsea MacDonald) delivers a scorching, full-frontal indictment. Self-deceptive and unable to face unpleasant truths, Walt's "cut to" is his escape hatch.

Under Adam Henderson's direction, Paul Herbert, one arm in a sling, delivered a master class in acting. Starting high and staying there, he modulated, tempered, varied, and fine-tuned his performance with the utmost subtlety, all the while navigating Hnath's rapid-fire dialogue and reading the screen directions aloud. Brian Parkinson's restrained Roy made an admirable foil to Walt's high energy and bombast. The parts written for Ron, the son-in-law and for the unnamed Daughter are small but telling. Chelsea MacDonald roundly laid out to Walt precisely why she loathed him, but her scenes with him later in hospital were more nuanced and touching. She comments, "You don't live well with people. More like a god than a person." Herbert's delight was palpable. I found Ryan Trieus' sycophantic Ron more grating than ingratiating,perhaps intentionally so, as his true, traitorous colours are gradually revealed.

I thoroughly enjoyed Julia Henderson's Disney-esque lemmings projected on a screen behind the reading table, and many of the perhaps too-many others. Jacob Ong's lighting design cast effective moody emphasis.The final video sequence as Disney dies and his head is frozen were stunning.

Costumes and set were suitably low-key and unobtrusive, except for the bright splash of Disney's sling and a Mondrian-esque piece of abstract art on the wall, possibly a reminder of the 20th century notion that art has no relation to reality.