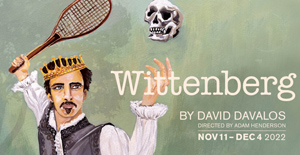 Who would have thought that listening to Martin Luther work through his issues with the Church could lead to a hilariously entertaining evening? Davalos's subject inevitably brings to mind other playwrights who have engaged in vigorous dialectic, Tom Stoppard, Michael Frayn, John Osborne, but Davalos is his own man and the play is as funny as it is thought-provoking.

Hamlet’s University of Wittenberg to an Elizabethan audience was like UC Berkley in the 1960’s – a place of dangerous ideas and bad behaviour. Davalos plunges into university life in 1517, peopling it with an engaging Luther, his friend and opponent, Dr. John Faustus, women and a young Prince Hamlet, the quintessential undecided student..

In Faustus, Davalos has created a Falstaffian figure, a man of voracious appetite for both women and ideas, intellectually brilliant, an inspired and inspiring teacher. He throws in a touch of Timothy Leary and a whiff of Freud. Together with other references to modern tropes this is over the top but still funny. Matthew Bissett inhabits his character with gusto.

By contrast, Luther as performed by Misha Kobiliansky is quiet, intense and charming. Infuriated by the Church’s promotion of selling indulgences, to raise money to build St. Peter’s Basilica in Rome, and prodded by Faustus to write (publish or perish), he argues with Faust over the Church’s behaviour, the Church’s teaching and points of theology until he has developed his famous 95 discussion points. All the while he tries to re-direct Faust’s energies and save his soul.

Caught between the two is their student, Hamlet (Dylan Nouri). As the play opens, Hamlet has been to summer school at Krakow U, met and impressed Copernicus, and been given a mind-blowing idea of Darwinian proportions – that the earth rotates around the sun, an idea which overthrows the accepted wisdom of centuries. Intellectually convinced but otherwise at a loss, he looks for help from his profs, the steadfast man of faith and the open-minded adventurer. “To believe or not to believe – that is the question.” Davalos gives Hamlet blank verse to speak, hallucinatory dreams and a very antic disposition. For most of the play though, Hamlet fails to be believable as the star pupil who could be asked to peer-review Luther’s manuscript.

Where Luther’s obsession is Biblical text, Faustus’s is women. Deborah Vieyra plays The Eternal Feminine with verve, skill, brains and fun. She is variously a barmaid, Marlowe’s Helen, Goethe’s Gretchen and, in an astonishingly disrespectful and funny scene, Mary, the Mother of God.

This is a play chock-a-block with ideas, wit and jokes. It is also about the beginning of a new world and our place in it. At the close, Hamlet gets news of his father’s death and prepares to leave for Denmark, Luther’s Disputationes have been nailed to the church door, the Eternal Woman has turned Faust down in favour of independence. Lutheranism and Literature have begun.

Julia White dressed the cast with efficient economy: extravagant red coat for Faustus, Augustinian black for Luther, basic Tudor with backpack for Hamlet, plus some very nice tennis whites. Lighting by Michael Method kept scene changes clear and focussed, despite a rather busy but interesting set (Emily Dotson). Besides keeping this riotously talky play moving effortlessly and clearly, director Adam Henderson has highlighted friendship as well as theology and allowed all his characters to be kind, an added pleasure to a most pleasing play.