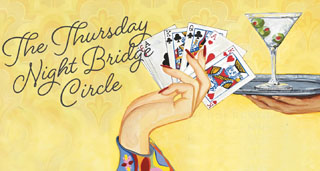 The Thursday Night Bridge Circle is set very specifically in the small town of LaGrange, North Carolina, 1970. The Southern garden backdrop (by Brian Ball), fronted by a beautiful, magnolia-covered scrim evokes an aura of Southern grace and comfortable living. The unseen backdrop though is a racism so pervasive that for many of those living in it, it is invisible.

It is the turn of Mary Louise Kennedy (Evangela Kepinski) to host the regular meeting of the Bridge Circle whose well-heeled membership is virtually hereditary and includes three generations of women. Louise is forward-thinking - she has dropped her first name, she's wearing her new, fashionable, hostess caftan and in a break with tradition will be serving only canapes - made by the family housekeeper, Margaret, movingly played by Allyson Riley. One by one the guests arrive, each with her own story and place in this world. Louise's best friends, the wise-cracking Bootsie (Kyla Ferrier) and the more serious Cluster (Rebecca DeBoer) are followed by Louise's mother, Mrs. Kennedy (Sheryl Anne McMillan) a very conservative and controlling woman, and her mother-in-law, Mrs. Coltrane (Erin Matchette). She is an exotic here, having been a suffragette. Miss Caroline, the local piano teacher and Louise's daughter Mary Carter (Ava Stark) are also invited while Margaret's daughter Neecie (Sarah Reech) will stand in for the usual bar-tender. Also filling in is Miss Virginia. Universally disliked, she has been a member of the Circle longer than any of them and must be endured. Kathryn Shaw has terrific fun playing this filthy-rich, hard-drinking and opinionated woman.

It seems that a comedy of manners is to be the evening's fare as the women discuss local events including the integration of their school. The final guest is Louise's new sister-in-law, Carmella (Caitlin Clugston). Fresh from New York, Italian, Catholic, curious and very open in manner, she is astonished by the physical display of racism such as separate post offices. It's just the way it is, the others say, it doesn't mean harm. Or so they think until they ask Margaret. She has a different view and says so clearly.

The rest of the play deals with everyone's reactions. The twists and surprises which follow grow naturally but not inevitably from the characters established earlier. Each of the ladies has some choice.

Ray Kennedy's control of his 11 characters is so confident that he can explore the South's coming to terms with its society and give his characters their own distinct stories without turning them into mouthpieces for a point of view. This is a true ensemble piece, and the cast is uniformly excellent. Evangela Kepinski's Louise is by turns funny, charming and devastated. Caitlin Clugston brings a stylish New York air. The two determined representatives of the next generation, Sarah Reech and Ava Stark equal their mothers in eloquence and feeling. Kyla Ferrier, fabulous in a Courreges dress, Sheryl Anne McMillan with secrets up her sleeve, thoughtful Rebecca DeBoer, feisty Erin Matchette and the sensitive Rhona McCallum Lichtenwald round out the sisterhood.

Ray Kennedy is kind to his characters. The '70 were still a time of hope for the better, so the play leaves us still hopeful.