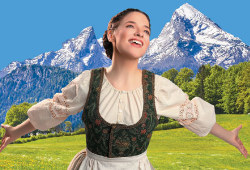 The Sound of Music is undoubtedly best known for the film adaptation, but Rodgers and Hammerstein’s incredibly popular musical first opened on the Great White Way back in 1959 – exactly sixty years ago. It would be another six years before Julie Andrews and Christopher Plummer would “climb every mountain” together in glorious Technicolor. Both Robert Wise’s film and subsequent stage versions owe their success to Maria von Trapp’s memoir The Story of the Trapp Family Singers.

As we might expect in a theatrical production, it does take liberties with the true story. However, Arts Club Theatre’s The Sound of Music maintains Baroness von Trapp’s core themes of family values and steadfast integrity in the face of adversity.

Set in Salzburg in1938 on the eve of what was to be a temporary forced union between Austria and Nazi Germany. Essentially, the story follows Maria, a novice at Nonnberg Abbey. Her passage to her final vows is interrupted when she is directed by her mother superior to act as interim governess to Captain Georg von Trapp’s seven children. Because of her love of music and diametrically opposite in personality to their stern father, she is an instant favourite with the children and eventually the captain warms to her quirky charm.

What has made The Sound of Music both a cinematic and theatrical success is the music. After six decades audiences still flock to see yet another adaptation of this magical pièce de theatre for the heartwarming story – absolutely, but also for the many instantly recognizable songs. “Do-Re-Mi”, “My Favourite Things” and of course, “Edelweiss” are no longer just show tunes but have crossed-over to the American Songbook.

There were aspects of this Arts Club Theatre production that I had not fully appreciated in other mountings, such as the nuns singing the Preludium (Morning Hymn) that so efficaciously opened the show. And why it is so important to have a strong singer in the role of the Mother Abess. Certainly, in classical soprano Annie Ramos, Arts Club have brought in the best there is.

Having previously seen Synthia Yusuf in radically dissimilar roles to that of Maria von Trapp, I wondered about her suitability.. I needn't have worried, outside of her opening title song, she managed to make the role her own. Musical theatre veteran Jonathan Winsby makes for a gallant Captain von Trapp, with a gorgeous voice to match. Initially coming across as somewhat stiff early on, he showed remarkable range in the second act. It was the younger cast members as the von Trapp children that almost stole the show from the more experienced adults. In particular, Jolene Bernardino as Liesl von Trapp executed Shelley Stewart Hunt’s expansive choreography with charm and grace.

Among the supporting cast, Andrew Cownden was an ideal choice as the mischievous and malleable Max Detweller, while Meghan Gardiner offers an aloof sophistication as the captain’s would-be fiancée Elsa Schraeder, and yet as a sympathetic Sister Sophia in her secondary role.

Arts Club Theatre has spared no expense in bringing quality to the production. Designer Drew Facey has provided a set that transforms in a matter of moments between the two main settings: the von Trapp grand estate and Nonnberg Abbey. Mr. Facey also created the period specific clothing of mid twentieth century Europe that range from the children’s adorable clothing to the detailed military uniforms and the nun’s habits.

Is there a need for improvement with any of the production elements? Well, certainly the sound system could handle tweaking. The volume of Synthia Yusuf’s singing occasionally seemed out of sync with the vocal effort. Even among the children, their singing voices were audibly stronger than their speaking voices.

The opening night performance received a much deserved standing ovation. Fans of The Sound of Music, which I’m sure are legion, will almost certainly make this production a critical and commercial success.

After receiving informed feedback, the reviewer has voluntarily edited this review to remove problematic language that has given offence. Both the reviewer and reviewVancouver are opposed to discrimination of all kinds and regret the harm caused.