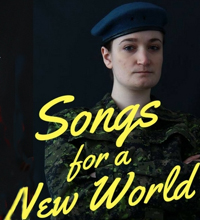 Fabulist Theatre’s production of Songs for a New World is an agreeably entertaining, even fascinating musical revue. Hardly musical theatre by any stretch, there’s no consistent storyline, no scenery, save for a canny use of numerous props, and what drama there is comes from the impassioned delivery of the show’s twenty songs (Some of which are recycled).

Despite the show’s central theme being one of optimism, there is a cynical thread running through most of the tunes. While a couple of songs do assert tongue-in-cheek humour, most are tender ballads or hymns of personal reflection about ‘real’ people who, perhaps through no fault of their own, have reached the lowest ebb in their lives yet are intent on climbing back in contention.

In this well intentioned live performance of Jason Robert Brown's music, I did find some songs deeply effecting, but those feelings were often short-lived due to an immediate switch to the next song with less emotional context.

Each song introduces us to a new character(s). Co-directors Damon Jang & Mary Littlejohn have decided to go for a topical, though unconventional reading by connecting the songs to the plight of migrants, refugees, battle weary soldiers and newcomers who find themselves on the margins of society.

Traditionally this show is done with a four-handed cast (two women, two men), but for this mounting, the cast has been expanded to fifteen, ranging in age from eleven to sixty with varying levels of theatrical experience.

Cheryl Mullen, likely the most seasoned professional of the group, makes the most of her solo to comedic effect in “Surabaya Santa” as a dissatisfied and libidinous Mrs Claus about ready to poor Santa with divorce papers. Not every scene works quite so well though. Shina Likasa serves up “I'm Not Afraid of Anything” dressed as a child–soldier in strife-torn Somalia.

The show starts in a bustling airport that might be just about anywhere. The audience meets the entire company with the opening song that beckons a promise of a new world. The mood shifts seamlessly into “On the Deck…” where five singers take a journey to a “promised land” that may be no better than what they have left behind.

Aerhyn Lau puts his strong voice to excellent use with a dramatic rendition of “She Cries” about a man who struggles with his decision to leave his fiancé. Rema Kibayi led the company in the neatly choreographed “Steam Train” about a man determined to be a basketball star. Kibayi ends the first act finale with his defiant declaration, “You don’t know me yet – but you will.”

The production does have flaws. Not least is the poor lighting. The entire show is performed in an unremitting half light regardless of time or place. In one instance, the lighting was adjusted mid-scene without any corresponding activity on stage. None of the singers were equipped with face-mics, so those with lighter voices stood to be overwhelmed by the accompaniment.

Nonetheless, this is assuredly a gutsy undertaking by a young theatre group in bringing to audiences unfamiliar songs by a little known composer.