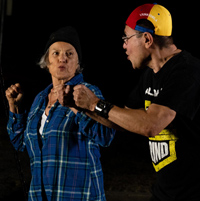 Half dozen friends meet in an urban park playground to celebrate the last days of high school. The characters in Matthew Whittet’s ensemble play are the same age – seventeen - one is fifteen, the younger sister of one of the hopeful graduates. The first thing you notice is that the actors are middle-age (and older). This theatrical device provides an opportunity for the group to offer both reflections on their now past school life and a window to their future as adults.

They’re all under-age in terms of consuming alcohol, but that doesn’t stop them observing the occasion with beer and tequila. As the carousing teenagers become more inebriated, secrets and insecurities come to light. They all seem to sense that this moment is pivotal in their young lives.

Mike (David Bloom) and Tom (Gustavo Febres) have been friends since elementary school despite obvious personality differences. One senses that Tom, who is more judicious, will attend a university and be successful. Mike, on the other hand, is more volatile and will predictably end up married and divorced.

Jess (Linda Pollard) and Emilia (Suzanne Ristic) are simultaneously friends and strangers. The capricious Jess is the more likely of the two to glide through adult life, while her more sensitive sidekick will likely fare less well. The gang is joined by outlier Ronnie (Allan Zinyk) and Mike’s kid sister Lizzie (Eileen Barrett) who manage to ingratiate themselves into the group. Whittet’s play engages the audience through the cast and director’s understanding of what it’s like to be a confused seventeen- year-old, but also a rancorous adult.

Director Michael Fera brings out a straightforward production, wisely allowing the actors free rein. Alaia Hamer’s well constructed set of a swing and horizontal ladder in a children’s playground gives the actors free movement. The play doesn’t really have a storyline, but rather it’s a character study.

The playwright strikes a fine balance between high spirits of the freewheeling youth and genuine apprehension for a future that these young adults face.