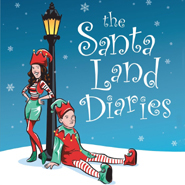 The SantaLand Diaries by David Sedaris, adapted by Joe Mantello

What do you do if you’re one of the “humbug” set, and want to get through another night of everyone else’s Christmas cheer? You might consider checking out The SantaLand Diaries to commiserate with an unfortunate soul who’s lived the life of a department store elf. David Sedaris’ experiences as a Macy’s elf was adapted for the stage by Joe Mantello in 1996, and that’s what we see in the humourous work showing now at Presentation House. With two performers and plenty of characters, the evening is full of quirks, some chuckles and a few guffaws.

Alan Marriott is physically suited to play the elf, Crumpet, with his fairly small stature, slightly hunched shoulders, forged facial grimace and wide range of voices, used liberally as he recounted his experiences behind the scenes of Macy’s annual department store Santa Claus shenanigans. He had us laughing as he carried us through the ironies and funny moments of his getting hired, putting up with the other elves, trying to relate to the crowds of kids, parents, and other strangers, and, of course, getting to know the quirks of all the Santas who worked the many shifts.

Sandra-Mae Luykx added great punctuation with her walk-ins as those people Marriott was telling us about. Her considerable talents as a musician were also highlighted throughout the performance. She was, in turn, sexy, bitchy, cute and innocent in her many roles, and though her appearances were brief, her skill in projecting the various characters gave colour and life to Marriott’s monologue.

The sets suited the mood and setting of the play without overwhelming the intimate space of the venue, and the cute and colourful costumes were just what one would expect, or might have seen, in a department store Santa’s workshop setting. Light and sound requirements were not overtaxed, and worked like a charm.

Sometimes, opening night is not the best time to see a performance. Reasons vary from shakiness in the action to malfunctions in light or sound, or the artificial audience that takes over large portions of the seating - friends, family and associates of those in the production. There were times when Marriott seemed under-rehearsed or distracted, to be struggling to remember what to say next - not often, but often enough to notice and feel it.

There were no malfunctions to speak of, and if one remembers his elf’s collar falling off, it seemed to fit perfectly into the monologue, and added a moment of humour. A particular distraction for me had nothing to do with the fine performances before us. One person in the troop of friends and associates might have had the honourable intention of trying to lead the audience into laughter at practically every line spoken, but the forced and exaggerated outbursts were annoying, and served to belittle the performance through an excess of artificial appreciation. Every line in the play was not funny, nor, I’m sure, were they ever intended to be. Where does the humour arise, if not from contrast with the serious? Marriott knew this, and Luykx brought in many punchlines.

Both carried off the evening with admirable skill and class, and I would certainly recommend seeing them for an evening of great fun and elfish humour. You’ll enjoy the performance now that the cackle has vacated the premises.