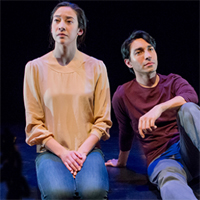 Set in Newfoundland many years before its confederation, Salt Water Moon is David French’s (chronologically) first of a series of stories about a family who moved to Toronto while Newfoundland was still an autonomous Dominion.

The production of this revival is just about as minimalistic as you can get. No set, save for a cluster of naked flame candles placed strategically on the stage floor; No costumes, actors allowed to wear the clothes they likely rehearsed in. It’s a kitchen sink drama without the kitchen sink. There is no pretext that suggests that the principal actors have been anywhere near Newfoundland. Kawa Ada is an Afghan-Canadian; Vancouver born Mayko Nguyen is of Vietnamese heritage.

Perhaps it is because of all these factors, rather than despite them, that director Ravi Jain manages at some level to make it work at all. He brings an ecumenical and surreal sense to this mounting. Having Ania Soul as a constant presence on stage providing an incidental musical back-drop as well as filling the narrative gaps added to the cosmogonal quality. Personally, I found Ms. Soul’s stage directions somewhat gratuitous – who cares if Mary is supposed to be dressed in a yellow dress and not blue jeans she is actually wearing? The audience is expected to use its collective imagination in a scene when Mary turns away from Jacob to enter a house, but remains visible on stage.

Jacob Mercer (Kawa Ada) returns home after living in Toronto for the past year, hoping to find everything, including Mary Snow’s (Mayko Nguyen) feelings for him unchanged. Jacob is cocky and sarcastic, Mary is earnest and now engaged. There is a palpable hostility between the two, mostly because she felt betrayed when Jacob left town without even a goodbye.

Jacob’s instilled patriarchal values work against him here. His charm offensive is calculated for effect and it becomes obvious that there is bad blood between Jacob and Mary’s fiancée. Mary just reacts to Jacob’s arguments but doesn’t show signs of capitulating. As the play progressed, I found myself reacting counter intuitively to how the audience in general is expected to empathize with the characters.

Kawa Ada gets the measure of his character bang on. Mayko Nguyen, on stage for the entire performance delivered many of the nuances of a conflicted seventeen-year-old, but her intensity dropped off from time to time. There were instances where she was barely audible at the back of the auditorium.

This Factory Theatre bare-bones production Salt Water Moon is very different from the last time a saw this play. While I appreciated Ravi Jain’s subtle vision, I wonder if everybody else will.