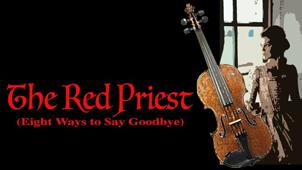 The Red Priest (Eight Ways to Say Goodbye) is Mieko Ouchi’s first full-length play and was in fact, nominated for a Governor General's Literary Award. Set in Paris in the spring of 1740, this two-handed play focuses on the last year or so of the already fading life of Italian Baroque composer Antonio Vivaldi. While Ouchi’s play centres on a famous historic figure, the six week episode of his encounter with a nobleman’s trophy wife is speculation.

Like many composers of the time, Vivaldi is facing financial difficulties in his later years. His best years, when he created such works as a quartet of violin concertos Le quattro stagioni (The Four Seasons) as well as forty operas, are well behind him. He now earns a living teaching the violin to those that can afford the tuition. Vivaldi is not happily disposed about his present musical standing – “death in poverty or a life in prostitution” we hear him expound in one of his numerous dialogues.

This brings him to the formal Parisian garden of an aristocrat, known only as ‘The Woman’ with the foreboding assignment of teaching her to play the violin to performance level in six weeks. Their teacher/student association, as well as their personal relationship gets off to a rocky start. They never address each other by name, but in the formal courtesy titles of Maestro and Excellency. The woman is only initially motivated by her husband’s wish to see her perform, rather than becoming Vivaldi’s protégé or even a genuine desire to play the violin. From Vivaldi there is a haughtiness and repressed elitist condescension.

The playwright’s dialogue is quite dense, yet thoroughly enjoyable and easy to follow; though curiously, delivered by the two actors with very different forms. Steve James’ reading of Vivaldi is more typical of an eighteenth century middle-class artisan, while Tracy Jennissen’s take on the patrician is far more strident than we might expect from her bearing. James is terrific as the teacher who tries to teach his student more than music, but also about life itself. Jennissen’s fictional character is more complex, but she does somehow manage to separate the aristocrat from the novice violinist. Her steady improvement on the instrument is admirably executed by violinist Gizelle Rocha, partly visible behind a scrim.

Vivaldi’s music features only sparsely in this production, so anyone going with the expectation of a Baroque music feast may be a little disappointed. Nonetheless, there are plenty of reasons to go and see this play. Notably, Catherine E. Carr’s perfect period clothing and Keltie Forsyth’s evenly paced direction.