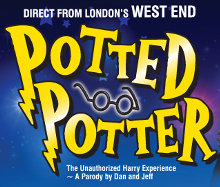 Potted Potter originated as a five minute street performance in England in 2005 before expanding into a full show, touring, and performing at the Edinburgh Fringe Festival. This Canadian tour features the original creators and performers, Daniel Clarkson and Jefferson Turner, who have also created Potted Pirates, Potted Panto, and Potted Sherlock. The performers aim to parody all seven Potter books and have an interactive Quidditch match in 70 minutes (we got 15 bonus minutes the night I went).

The actors are talented, energetic, and very funny. They seem to be having a lot of fun and made each other laugh several times with what seemed liked spontaneous, improvised bits. Both are quick witted and there were many hilarious moments of interaction with several audience members. The performances perhaps could be even stronger if their impressions of each character sounded or looked more like the original but I believe that may be intentional. Their performances, otherwise, are very polished after so many years of touring the show.

I haven't been to the Vogue Theatre in many years but the leg room is tighter than an airplane, making for a very uncomfortable and cramp-inducing experience. I have never seen any venue go to such extremes to sacrifice an audience's comfort to fit more people in. The rows and seat numbers could also use better signage.

The production does not rely on or use big budget effects or have a large cast as one may expect given the venue (and the price). The performers use this as a running joke. The set is also humble and this is also used for comedic fodder.

This would be a great show for Harry Potter fans and those who enjoy light comedy (though the price is a bit high given the production values, size of the cast, and lack of comfort in the theatre).