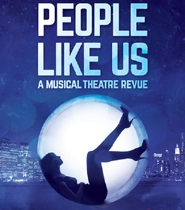 People Like Us
A new musical revue for charity

Opera Mariposa annually presents a benefit show in honour of International Awareness Week for Myalgic Encephalomyelitis/Chronic Fatigue Syndrome, Fibromyalgia and other chronic neuro-immune diseases. Part of the money that patrons pay through ticket sales is generously donated to the National ME/FM Action Network, thus supporting people who suffer from these invisible illnesses.

This year, for one night only, the audience was treated to People Like Us, a contemporary musical revue that puts popular show tunes in a brand new context. Set on a single night in a friendly neighbourhood New York City bar called JO’s, a motley group of complex denizens pervade a watering hole run by Jo, (who else?) a no-nonsense bartender (Karina Billesberger).

The show began appropriately with “Another Hundred People (got off the train)” from Stephen Sondheim’s Company, a selection that introduced four of the female performers to the audience. The first solo offering was “Don’t Wanna Be Here” by sixteen year old Zenia Marshall, who bears an uncanny resemblance to Arianna Grande.

The next patron to enter the bar, the gorgeous Imelda Gaborno provided a poignant rendition of “Even Though.” She immediately followed up with Glen Hansard and Markets Irglová’s “Falling Slowly” - a duet with Andrew Wade.

Brittony LeFever dropped in to sing only one song – “One Song Glory” from Rent, but stayed at the bar til the end of the show. LeFever’s impassioned rendition probably needed a mood change, so it was left to Ann-Marie Zak to step up with a delightfully camp performance of “An Old-Fashioned (Lesbian) Love Story.”

Jacqueline Ko brought the first act to a satisfying conclusion with a pair of Sondheim tunes: a sneering rendition of “The Ladies who Lunch” followed by “Could I Leave You,” about a woman’s indifference towards her marriage.

The youngest cast member, Zenia Marshall kicked off the second act with a fun, tongue-in-cheek interpretation of the calypso ballad "Kiss the Girl" from Disney’s The Little Mermaid. Marshall, together with Ann-Marie Zak took the opportunity to show off their penchant for physical comedy.

When you only have single-handed accompaniment on piano, it has to be precise. Heard, but hardly seen, Angus Kellett deserves special kudos for providing attendant musicianship.

The show ended with the entire cast delivering an inspirational rendition of “Love Heals” from Rent.