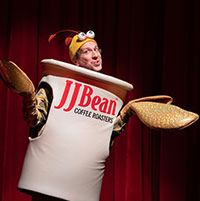 Presenting The Little Mermaid to celebrate a decade of Panto, the opening night guests were in for a delightful holiday treat as The Cultch invited us to be “a part of their world!” Pun intended for us true Little Mermaid fans.

For those who don’t know what Panto is, it an annual East Van holiday tradition where a fairy tale is modernized to be based in our beautiful city of Vancouver. This year celebrates the 10th play that was produced by the Cultch under the spirit of the Panto.

The audience was filled with all ages, ranging from toddler to seniors, and collectively participated in the Panto tradition of interacting with the cast with phrases that are explained at the start of the event. This kept the audience engaged throughout the performance that was brilliantly delivered by vibrant actors.

The acting was well executed with incredible vocals and humourous dialogue. The villain Ursula played with the audience where the toddlers in the audience would yell back at her, which heightened the playful and engaging aspect of the experience.

The set was convincing, whether it was under the sea or New Brighton park. With the orchestra on stage, it felt like a true high-end production and it was impressive to see the various props along with scene changes executed. I looked around the audience when the bubbles fell to mimic the ocean and witnessed the glee in the children’s eyes that looked on.

The costumes were well thought out in terms of bringing the Vancouver vibe into the performance, such as Sebastian the crusty crab who was engulfed in an oversized JJ Bean coffee cup. Ariel and Ursula were well-dressed which brought out the true Disney nostalgia.

Lastly, while this was a fun and light performance, I did appreciate the ethnic diversity in the cast and the script touching on LGBTQ2s as this sense of acceptance for everyone is the truth theme that East Vancouverites pride themselves on throughout the year.

If you’re looking to get out of the cold for a festive holiday event, join this vibrant cast “under the sea”!