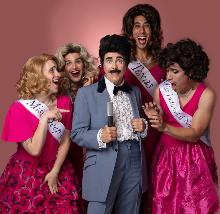 Pageant is a mildly entertaining musical spoof on those once oh-so-popular beauty contests. The show is part burlesque and part good-humoured satire. Set in Spokane, Washington in 1989, six “Natural Born Females” that represent distinct regions of the Unites States, compete for the title of Miss Glamouresse. They are guided through their customary functions of parading in front of judges (selected from the audience) in various modes of clothing by MC Frankie Cavalier (Rachel Hayward) – who, as the only real female in the cast – seems to take inspiration from Wayne Newton.

Our genial host, complete with Vegas style wig and faux moustache, offers an early musical contribution with “Something Extra,” delivered in a style that would comfortably fit within any episode of Sesame Street. Ms. Hayward may lack perfect comic timing, but she certainly commits to the role.

This contest has all the elements of beauty pageants that were scattered through small and medium sized cities across North America in the previous century. It also has the added segment ‘spokes-models,’ where contestants unabashedly promote – or rather push - questionable beauty products like “Face Spackle” - beauty aids that might be more likely found on the shelves at Home DepotTM rather than London DrugsTM.

The “girls” certainly seemed to have fun, particularly with the bizarre individual talent section. I found some of the turns difficult to sit through, but Jacob Woike as Ruth Ann Ruth aka Miss Bible Belt uncovers a sardonic gem in “I’m Banking on Jesus” delivered in unmistakable Godspell style.

I was unable to see Pageant when it first came to Vancouver three years ago. Watching live theatre alone on a screen, probably doesn’t do it justice, but after kicking around for some thirty years, its humour is rather well-worn. I couldn’t remember who won the contest five minutes after the end of the show – not that it mattered.