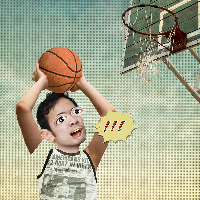 Everything about Simon Bent’s adaptation of the John Irving novel A Prayer for Owen Meany is large. A cast of seventeen actors share twenty-eight roles. Some actors go through as many as four costume changes. The original hard cover novel is the thick end of 600 pages.

The anomaly is the diminutive central character. The most striking feature of the sparse set is a roughly double-sized wooden chair stood against the stage’s west wall. When the play opens we see that the oversized chair provides the illusion of its eponymous occupant looking small.

Kudos go to Ensemble Theatre Company for even attempting this production. John Irving himself even doubted the possibility of his novel ever being made into a film version. Much of the success of this remount, playing at the Pacific Theatre is due in no small part to a stellar production crew as well as epic performances from Chris Lam and Tariq Leslie in the leading roles.

The play, through its principal character, an unmitigated outsider who and considers himself an agent to the almighty, takes on complex spiritual and social issues. Owen’s story is narrated in two intertwined time frames by his childhood best friend John (Tariq Leslie). The initial time frame is through the perspective of John in the mid-eighties (around the time the story was written), with John now an American expat living in Toronto. The alternate time frame is John's spoken narrative growing up in New Hampshire in the fifties and sixties alongside his best friend, Owen Meany.

Young Owen is a contradiction in terms. Raised as a Catholic, he is anti- religion though pro-God, he is anti-war, but enlists in the military. And for someone who is a self-pronounced instrument of God and supposedly destined for higher purpose, he sure uses a lot of profanity.

Chris Lam is brilliant as Owen Meany, someone who is out on the edges of convention and prefers to stay there. Omnipresent on stage for the entire two and a half hours, he must transform from a six year-old, bullied by his peer group to a disciplined army lieutenant. While all the time, retaining his little boy voice through adulthood.

Tariq Leslie (also responsible for producing) turns in a solid performance as John Wheelwright. However, it might have been wise to employ a younger act for his character at the schoolboy stage. Unlike Chris Lam, he appeared decidedly out of place in the earlier time frame. Alexis Kellum-Creer cuts an elegant figure as Tabitha Wheelwright. That is until her premature demise when struck by an errant baseball early in the second act.

Among the large group of supporting actors, I had to like Alysson Hall’s oddball over the top portrayal of Owen’s classmate Mary Beth. Gabriel Carter and Kim Steger bring an extra dimension to the play as Owen’s quirky parents, occasionally getting showered by dust caused by blasting from the adjacent quarry.

Among the production’s design crew, Julie White deserves a special mention for clothing the cast in period specific costumes. The detail of the military uniforms is remarkable, also, the attire that Ms. Kellum-Creer wears so well. Patrick Smith’s lighting helps as the story switches between time frames.

Despite tackling some weighty issues, there is a lot of humour to enjoy in this play and some the densest dialogue you will ever hear on stage.