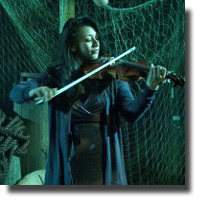 Talented actor and musician Julie McIsaac (Vancouver theatre-goers might have seen her in Mother Teresa is Dead and The Spitfire Grill) has now turned her hand to writing. Her first play, The Out Vigil had its premier public performance at the Firehall Arts Centre on St. Patrick’s Day. The curious title is derived from the fictional ritual of women lighting a candle and keeping the flame lit while their kinfolk are out to sea.

Audience members arriving early to take their seats were rewarded with a pre-show jam session of East Coast folk music performed by the cast. The audience later joined in on a couple of verses of a post-show rendition of “The Leaving of Liverpool.”

The characteristically East Coast score, also written by McIsaac and performed live on stage by Christina Cuglietta on violin and Alison Jenkins on accordion, is as an important element as the dialogue. The two musicians are just as an integral part as the actors moving around the stage like ethereal beings.

The basic storyline of Danny, an out-of-work Newfoundlander and Lizzie, a clerk in her father’s general store is simple, but the various sub plots introduced throughout the play presents challenges for the audience. Act one is especially opaque as the action switches between Dutch harbor, Alaska and Little Habour, Newfoundland. McIsaac also uses a time slip device that sometimes creates confusion with the chronology of time and place.

Danny arrives in Alaska at the opening of the king crab fishing season looking for a job. A local fishing boat captain eventually offers him a job after testing his mettle and calling him a “greenhorn.” Danny has sold his truck back in Newfoundland and given Lizzie the money, who he believes will remain home. But when Lizzie arrives in Dutch harbor, 7000 miles from home it adds an extra complication to Danny’s plans.

Matthew MacDonald-Bain as Danny and Stephanie Israk as Lizzie turn in decent performances and even get the requisite “Newfie” dialect spot-on. However, each is guilty of speaking too quickly to be clearly understood.

Julie McIsaac’s “modern fable” is certainly good to look at, even better to listen to, but a little difficult to follow.
‘Tha tiz n’ cain’t be no tizer.’