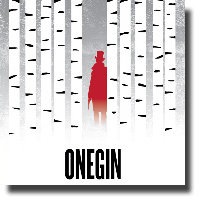 Onegin by Amiel Gladstone and Veda Hille, based on the poems by Alexander Pushkin

Alexander Pushkin's classic novel Evgeni Onegin, entirely written in third person narrative and made up in rhyme scheme verse, had already been adapted as an opera by Pyotr Ilyich Tchaikovsky. Amiel Gladstone and Veda Hille’s made-in-Canada ‘sung-through’ rock opera adaptation for the Arts Club Theatre Company still keeps one toe in early nineteenth century Russia, but a whole foot in the twenty-first century. As directed by Gladstone, it’s a highly imaginative take on Pushkin's iconic cautionary tale of unrequited love and lost opportunity.

Onegin had its national premier in Vancouver in March, 2016, where it was heralded as is an unequivocal success. Since then, it has had a run at the Berkeley Street Theatre in Toronto this spring to a more subdued critical response, though with a different cast, a different choreographer and different designers.

Performed by a cast of seven of Vancouver’s best actors – most of the time occupying the stage as a collective – the play cogently floats between théâtre de l'absurde and intense drama. The first thing you notice with this remount is that the production is too big for the small Granville Island Stage, to the extent that both performance and staging spills over into the auditorium.

Set in St. Petersburg, long before its name change to Petrograd or when the Bolsheviks renamed the city Leningrad, the story centres on the passionate relationships of the derisive eponymous protagonist and the sensitive Tatyana, and with Tatyana’s younger sister Olga and her poet fiancé Vladimir Lensky. There is also the podtékst that deals with the unstable friendship between Onegin and Lensky.

On first meeting Onegin, Tatyana is smitten and reveals her feelings in a letter rendered in the song “Let Me Die,” self-accompanied on the guitar and conveyed to its recipient via audience chain. Onegin’s response is blasé in his rejection of Tatyana’s initiation of an affaire de coeur, insisting he could not commit to a steadfast relationship. The mood changes abruptly when the narcissistic anti-hero wantonly trifles with Olga for his own callous amusement. Onegin’s philandering upsets Lensky who demands satisfaction by way of a duel. Alas, it’s the young poet who falls to the ground when Onegin’s bullet finds its mark.

Alessandro Juliani is outstanding in a physical performance of the title character, both as the presumptuous dandy in act one and the self-reflective older man in act two. His droll rendition of “Three Horses” is priceless. Meg Roe, who clearly enjoys playing epic heroines, delivers a luminous performance as the noble Tatyana.

Lauren Jackson as the pernicious Olga and Josh Epstein as the woefully romantic Vladimir Lensky show off their penchant for physical comedy. Epstein in particular is compelling, closing the first act with the poignant “In Your House.” Andrew Wheeler is solid in support as Prince Gremin. Andrew McNee is outrageously camp in his numerous roles, particularly in a pasquinade of a French party performer.

On a crammed, slightly elevated floor musicians Barry Mirochnick on percussion, Jennifer Moersch on cello and Marguerite Witvoet on piano are visible to the audience and as much a part of the performance as the cast.

Both in terms of creativity and execution, Onegin is a success. It’s a visually arresting production and Amiel Gladstone and Veda Hille’s euphonic score could even stand on its own. Despite the emphasis on satire, there is enough emotional impact to engage the romantically wistful.