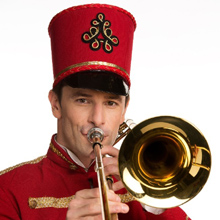 Set in the fictional location of River City, Iowa in the early twentieth century, The Music Man is Gateway Theatre’s most ambitious production of the season. The story will be familiar to many of those who saw Morton DaCosta’s 1962 film. The adapted film version has since been favoured with a place in the United States National Film Registry, presumably for its cultural and historical significance.

The Music Man is a captivating musical comedy with memourable tunes, and an appealing storyline with likable characters. The show’s premise revolves around Harold Hill (Jay Hindle), a con man who arrives in a small town and smooth-talks the locals into putting up large sums of money in a children’s marching band. Professor Hill (a title he acquired without benefit of credentials) gives the gullible denizens the impression that he will stick around to oversee the band’s successful launch, while all the time intending to slip away on the last train out of town.

For his underhanded plan to work, Hill has to stay one step ahead of the skeptical Mayor Shinn (Joel Garner) and strike up a romantic relationship with Marian Paroo (Meghan Gardiner) the town’s attractive librarian who is leery of the travelling salesman’s suspicious pitch.

There are stellar vocals throughout this production. Jay Hindle as the charming Harold Hill has a pleasant enough baritone voice particularly adept at the show’s delightful patter songs like “Ya got Trouble (with a capital ‘T’ and that rhymes with ‘P’).” Meghan Gardiner’s impeccable stage movement and her poignant interpretation “My White Knight” and her duet with Hindle “Till There Was You” are especially notable.

And who couldn’t find the barbershop quartet thoroughly entertaining? Close-harmony renditions of “Goodnight Ladies” and “Lida Rose” by the town’s councillors almost stole the show. Jennifer Long supplies some terrific physical comedy as the irrepressible Eulalie MacKecknie Shinn (the mayor’s wife). Among the younger cast members, Scotia Browner as Amaryllis and Oliver Gold as young Winthrop acquit themselves admirably and even held their own alongside more seasoned performers.

From the orchestra’s overture medley of the show’s hit tunes, to Marian and Harold’s counterpoint duet,The Music Man’s production value and performance quality were top notch. At the end of the opening night performance, the audience were on their feet in a standing ovation. If you’re looking for high-end holiday entertainment, The Music Man would be dollars well spent.