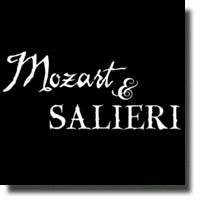 Theatre goers are accustomed to the standard running narrative of conventional theatre, often well written and acted, and almost always predictable in structure and presentation.

It is always refreshing to experience an imaginative take on theatrical production. This is a risky thing to do, however, as audiences have to be receptive and able to “get it” through ways that are not familiar to them. David Newham and Daniel Deorksen took such a chance in their presentation of Mozart & Salieri.

This adaptation of Alexander Pushkin’s classic play is staged in a series of “Fantasias”, which are isolated dynamic tableaux, presenting symbolic characters, rather than the conventional unfolding revelation of characters. This allows audience members to create and interpret the story and characters in our own individual ways. Music inspired by that of Mozart, Salieri and some of their contemporaries, combined with bold-coloured blocks of light, spotlights and shadow, create a stunningly rich palette for us to use in determining our individual interpretations. Iconic costumes are also especially instrumental in enriching our experience.

Music, light and costume are the physical ingredients that stand ready to give us a memorable evening. However, the talents of the actors must bring them to life for that to happen. Players in this production must be proficient musical instrumentalists, as well as expressive actors and capable singers. The formality of structure of this type of performance demands a more formal delivery. Keeping the audience at this certain distance, while drawing them into the characters and movement of the story, takes extraordinary effort and skill.

Fortunately, Cate Richardson as The Player, Masae Day as Mozart and David Whiteley as Salieri had the considerable talents and abilities that this production demands. Day’s performance balanced musical talent with just enough rakishness to delight us with Mozart’s whimsical nuttiness. Whiteley garnered our sympathy in a convincing portrayal of a Salieri tortured by self-doubt, who curses creation for making him a Judas in his relationship with Mozart. Cate Richardson sparkled as The Player, narrating, setting the scenes with music and song, and occasionally joining Mozart and Salieri in playful, satirical parodies of music and mood.

All three performances held up, and held each other up in this unique presentation.
The effective use of bold lighting, imaginative and versatile costumes, creative choices in music, lyrics and choreography, and versatile musical and acting talent definitely worked, in this instance, to give the audience a thought-provoking and delightful evening. The risks that Newham and Deorksen took in this production have definitely paid off. I, for one, look forward to seeing more of their creative endeavors. Congratulations to all involved!