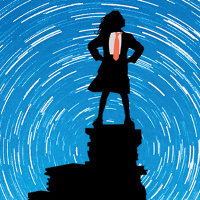 Arts Club Theatre
Matilda The Musical
book by Dennis Kelly, music and lyrics by Tim Minchin, from the novel by Roald Dahl

Matilda The Musical is based on Roald Dahl’s dark children’s story, adapted for the stage by Dennis Kelly and songs added by Tim Minchin. Set in England, roughly in the time it was written, it follows the misadventures of a five-year-old girl who doesn’t fit into her family’s self-centred dynamic. At some point every child gets bullied, though not usually by their parents. Despite all the emotional setbacks, Matilda somehow finds that inner strength and becomes an intellectual prodigy with an uncanny mastery of telekinesis.

Dennis Kelly’s stage version differs substantially from Roald Dahl’s original novel. Though, its central focus is on Matilda Wormwood’s uncommon precocity. The young protagonist’s story-within-a story related to the preposterous librarian (Sharon Crandell) about husband and wife circus performers is a complete departure from Dahl’s original work. Matilda’s simple storytelling is fine, but the enactment by Becky Frolinger and Andrew MacDonald-Smith presents a distraction from the essential narrative. I could have also done without the absurd Russian mafia scene near the end.

The show kicks off in fine form with eight children (all local actors) dressed in super-hero costumes (actually, one is a ballerina) extolling their parents pride in giving them birth with “Miracle” – a lively number, perfect for opening the show.

While Matilda’s relationship with her parents is scurrilous, Lauren Bowler and Ben Elliott deliver hilariously over-the-top performances as the adult Wormwoods. Ben Elliott assisted by Corben Kushneryk, who plays Matilda’s older brother Michael, offered up what seemed impromptu entertaining schtick during the intermission.

Georgia Acken, who shares the role of Matilda with Thailey Roberge and will alternate performances, is totally believable an introvert leader. She completely nails her character with confidence and conviction. The show could succeed or fail on her participation – fortunately, it very much succeeds. The (many) children in the audience may well have left the theatre singing Matilda’s infectious ditty “Naughty.”

John Ullyatt is brilliant as the pantomime villain Miss Trunchbull, Crunchem Hall’s comically terrifying headmistress. He almost threatens to steal the show from the bunch of cute kids in the cast. His rendition of “The Smell of Rebellion” earned him some good-natured ‘boos’ from the audience at curtain call.

Director Daryl Cloran manages his large cast well. He allows the natural exuberance of the younger actors to determine the pace. Anna Kuman’s choreography is simple, yet innovative. Designer Cory Sincennes’ basic set of floor to ceiling bookcases randomly filled with monotone volumes is seen throughout the show. By contrast, no expense is spared with costumes, particularly the children’s attractive school uniforms and the Wormwood parent’s outrageous clothing.

Three theatre companies have combined their resources in Matilda The Musical: Edmonton’s Citadel Theatre, the Royal Manitoba Theatre Centre, and Arts Club Theatre here in Vancouver. The result is clearly seen on stage as a high quality production.