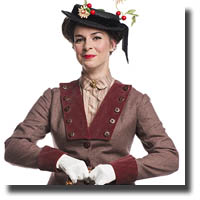 Parenting strategies are much more plentiful than modern-day adherents to the anachronistic adage about how sparing the rod will spoil the child. The job of governess is never an easy one when young charges are used to blowing off more than just steam until they get their way. So it is no surprise that the Banks children of Cherry Tree Lane, having proven to be more than most governesses can take, might end up being a bit of a challenge for the titular lead in Mary Poppins – The Broadway Musical. Nothing could be farther from the truth. Sara-Jeanne Hosie’s Mary Poppins is equal parts bombast and bravado.

No sooner does Mary Poppins (Sara-Jeanne Hosie) get young Jane (Kassia Dannielle Malmquist) and Michael (Graham Verchere) alone, than she enchants and amazes them by extracting large mirrors and hat racks from out of her moderately oversize handbag, all the while singing about how “Practically Pefect” she is in every possible way.

Would that were the case. If Ms. Hosie’s presentation is pitch perfect, it is also frequently overwhelming for the show at times when a softer approach would achieve a much needed winsomeness. All “Brimstone and Treacle” volubility and no “Spoonful of Sugar” finesse makes Mary Poppins an uneven play.

Scott Walters’ Bert is barely memorable. Warren Kimmel’s George Banks vacillates in a kind of schizophrenic double-mindedness between a peevish intolerance towards his children and a wooden sentimentality, neither of which manages to avoid being largely soporific.

Caitriona Murphy is a welcome relief in her role as Mrs. Banks. Ms. Murphy’s vocals bring a softness and a supple tender-sweet intonation that is lacking elsewhere in this production. “Being Mrs. Banks” left the audience wanting more from Ms. Murphy. And considerably less from Ms. Hosie.

If Katey Wright brings a voluble coloratura to her role as Miss Andrew, Sara-Jeanne Hossie is every bit her equal in the scene where the two governesses square off. But once that fire fight is over, Ms. Hosie continues to fight with fire, even after still waters are wanted.

There are, to be fair, wonderful moments, colourful costumes and sets aplenty, and some perfectly reasonable behaviour that makes practically perfect sense from a perfectly paternalistic world-view.

It was not all that long ago that the Broadway Across CanadaTM production of this play ran for a week in Vancouver. Comparisons will be inevitable. My rather gushing review of that production has to have been written in one of my more naïve moments. Reality is sometimes a harsh light. Consider the views of a sadder, but wiser man, and ask yourself: Why is the Arts Club not investing money in fresh Canadian playwriting talent instead of recycling shows like Mary Poppins?

“Are you sure you’ve not spared the rod too much?” said the artistic director to the critic. “Now who’s patronizing who?” replied the critic, adding a spoonful of sugar for good measure.