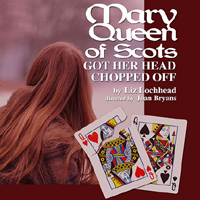 'Mary Queen of Scots got her head chopped off is a playground chant as well as the title of Liz Lochheads play, and like many childrens rhymes, this play is by turns playful, theatrical, gruesome and cruel. The language sparkles and leaps like a trout, the action flies back and forth between the English and the Scots Courts, private agendas, guile, backstabbing and plots abound.

Even 530 years later and 7,000 km away in Vancouver the outline of Marys story is familiar. Young and beautiful, she returns from France to be Queen of Scotland and is instantly embroiled in Scottish factional politics and religious change. Like her cousin Queen Elizabeth in England she intends to be a true ruler, not a figurehead in a mans world. A study in power, the play examines how Mary was different from Elizabeth and how their choices ultimately led to Marys execution at Elizabeths order.

The play is held together by The Corbie, the crow (Bethany Stanley) as potent a figure in Scottish lore as here in BC. She is part ring-master, part narrator, part chorus, full-time presence on-stage, with a sort of black glamour and a gleeful omniscience. She marshals characters on and off stage and fills in the setting and background for the audience sometimes with sympathy other times with cynicism and generally manages the three-ring circus that Lochhead presents. Bethany Stanley plays The Corbie with non-chalant confidence and wit, swiftly veering from confiding with the audience to summoning a queen on stage with the click of a finger.

Both qeens are intelligent and steely-willed, Erin Morgans Mary, resplendent with flowing red hair, a making a charming and feminine foil to stiff, controlled Elizabeth (Geneva Perkins). Intelligence and iron will are also found in John Knox. It is a measure of Lochheads even-handedness that Knox is a strangely sympathetic character. Kurtis Maguire brings out his integrity and a forceful stillness that is most effective.

James Hepburn, Earl of Bothwell, (a raffish Zander Williams) on the other hand is a thoroughly nasty and utterly captivating piece of work. It is no wonder Mary falls for him. She also falls for Henry Stuart, Lord Darnley (Alexander Lowe) and Davy Rizzio (Owen A. Kenney) the more gentle of her men, though Darnley was undoubtedly unpleasant.

Everyone in the cast plays more than one part. The two queens play each others maids and everyone doubles in the minor characters swapping between roles at break-neck speed without missing a beat.. Apart from Marys scarlet dress, basic costuming by Catherine E. Carr in tans and greys and greens make quick changes easy and small but telling contrasts such as the white lace facings on Bothwells cuffs help distinguish particular characters.

The play is written and was performed in rich and poetic old Scots. Unfamiliar words and strange accents flooded the stage, but they were rarely incomprehensible and seemed natural to the cast. Well done.

Under Joan Bryans clear direction this is an engaging performance of an exhilarating play.