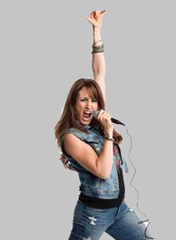 Ruby Slippers Theatre in association with Gateway Theatre
I Lost My Husband by Catherine Léger, translated by Leanna Brodie

I Lost My Husband is Catherine Léger's quasi-feminist, four-handed comedy. The title is a literal translation from the original French language play J'ai perdu mon mari.

Evelyn (Meghan Gardiner) is a regular party girl, generally pandered to by her older eponymous husband referred to by the cast as Peter who is never seen and only heard once. She is a frequent patron of the Capri bar where she enjoys karaoke and squabbling with barmaid Melissa (Agnes Tong) in roughly equal measure.

Gardiner and Tong set the show in motion with separate, but equally hilarious versions of the song “Black Velvet” (does anyone remember the Alannah Myles’ song written by early VJ Christopher Ward?). While somewhat inebriated, Evelyn makes a crazy double-or-nothing bet for the only thing that Melissa “is remotely interested in” – Evelyn’s husband.

This is where some suspension of disbelief is required – when Evelyn loses the bet, Melissa claims Peter as the proceeds of the wager. Conveniently, the writing never discloses Peter’s reaction to the situation, so let’s not poke holes in the bizarre premise. As Evelyn continues marriage counselling sessions alone and finding there is a difference between freedom and independence, Melissa starts to weary of Peter’s lack of fervour.

Meghan Gardiner takes complete control of the role of Evelyn, showing vulnerability in her quest for autonomy. Agnes Tong also acquits herself well as the savvy barmaid/law enforcement student who gives Evelyn as good as she gets. They get ample support from Raugi Yu as the perspicacious drug dealer and Curtis Tweedie as William, Evelyn’s slacker step-son.