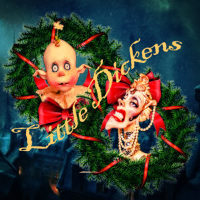 In seeing Ronnie Burkett’s Theatre of Marionettes presentation, Little Dickens, one has to put aside all preconceptions of puppet theatre and even of the Charles Dickens seasonal classic A Christmas Carol on which the concept is very loosely based. Despite a colourful cast of delightful marionettes and pseudo Christmas theme, this is hardly a family show.

This Lethbridge, Alberta string-puller brings together elements of bold storytelling, black humour, and unscripted razor-edged dialogue. He is also fond of introducing vaudeville and burlesque aspects in his shows and opens this one with a titillating strip-tease performed by Dolly Wiggler, a 50 centimetre high marionette with rather exaggerated curves.

Burkett is neither a ventriloquist nor really a mimic. Rather he operates and voices the puppets from the perspective of a dramatist who gives each of his hand- crafted marionettes a distinctive personality.

Many in the audience will be familiar with some of Daisy Theatre’s popular characters. Spidery-legged former Hollywood diva, Esmé Massengill takes on the central Scrooge-like role with caustic fervour in a quasi-theatrical adaptation of the Dickens’ tale of redemption. A cross-dressing Leslie Fuqwar does his best as the Ghost of Christmas Present, and of course, there is Schnitzel, the diminutive boy fairy, who brings a source of pathos to role of Tiny Tim.

As one might expect from an ad hoc show, it’s not particularly well paced with some segments being disproportionately staged. Edna Rural, the widow from rural Alberta dressed up like a Christmas tree (complete with lights) overruns the “Deck the Halls” sing-along.

Ronnie Burkett’s on stage presence ranges from being almost invisible to front-and-centre, occasionally taking time to explain certain aspects of the production to the audience. At the top of the show, he admitted to not previously performing Little Dickens and suggested with tongue-in-cheek that it may go for “45-minutes or seven hours” (it turned out to an hour and a half).

His show is ideally suited to the size of Cultch’s theatre space. Its intimate terrace and balcony seating allow the entire audience to feel a part of what is happening on stage.