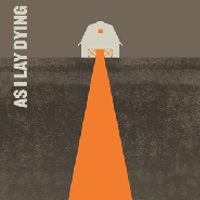 The Theatre Smith - Gilmour production of As I Lay Dying, part of this year’s PuSh Festival, is a study in how acting should be done. With a bare stage and simple costumes, and with nothing but light and sound to assist them, the actors in this presentation create a story as clear as if the production was full of elaborate sets and special effects. Kudos to the entire ensemble - directors, actors, stage managers and the technical creative team - for an engaging exploration of various personalities in a difficult time.

The plot centers on a family’s activities surrounding the impending and actual death of their wife and mother, and on the final disposition of her remains. Dean Gilmour, playing the father, Anse Bundren, portrays a weak man who is fortunate to have children with enough gumption to be good people - or as good as their time and situation allow. His four sons, Cash (played by Eli Ham), Darl (Julian De Zotti), Jewel (Benjamin Muir) and Vardaman (Daniel Roberts), and his daughter, Dewey Dell (played by Nina Gilmour), work through their own questions and torments in trying to help their father fulfill their deceased mother’s (Michele Smith) purported wish to be buried in a town some distance from their isolated, barely accessible homestead.

We learn from the departing spirit of the mother, Addie, that life has not been easy for this family. She reminds us that love waxes and wanes as a family forms and grows, and that it is duty and commitment, not love, that often carries a family forward. Nevertheless, this has somehow forged bonds of loyalty and love in this family that carry them through the challenges they face in burying Addie, and in preparing for the future that the surprise ending will bring.

As the action began, I was reminded of how we, as children, used to create our own magic worlds of imagination when we played. We would mime our actions, using our own sounds to simulate those that we wished to portray - the bangs of guns, the sounds of racing cars and screeching brakes, and so on. That is how this production is performed - though much more masterfully and magically than anything we could have expected. Ham’s construction of Addie’s coffin, and Muir’s struggles with - and as - his horse stood out. Reminders of childhood dreams and wonderings also emerged in the ramblings of De Zotti’s Darl Bundren, and in the thoughts and antics of Roberts’ character, the young child, Vardaman. Darl’s often confusing philosophical musings, and Vardaman’s naive perceptions were absolutely true to life. Nina Gilmour, too, was brilliant in her portrayal of Dewey Dell as a young woman forced too early into maturity, stoic and joyless, and already somehow accepting being beaten by her circumstances.

Dean Gilmour hid the complexity of Anse Bundren’s character beautifully, showing only a simple, faithful man, anxious to be liked, and saving the revelation of the man’s real character for the end. Michele Smith’s all too brief ethereal communication as Addie’s departing spirit was, indeed, haunting in its delivery and in the effects of it’s message, pivotal in our deeper understanding of the dynamics in the family. All the performers except Smith played incidental characters throughout the play.

There were no sets, and only a single board served as a prop. Costumes were authentic to the time, place and circumstances, and incidental characters were ably presented with clever costume and facial changes designed by Teresa Przybylski. Andre du Toit deserves special credit for his brilliant use of spots, lighting and sound to create settings and situations that immersed the audience in the action, and made it real.

This production of As I Lay Dying is a lesson in the essence of acting on stage, compelling the actors to use mime, vocal sound simulation and dialogue to create a reality for the audience out of nothing but the air around them. It is thought provoking and insightful, and masterfully presented. See it.