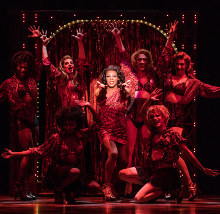 The touring production of Kinky Boots struts its stuff across the Queen Elizabeth Theatre stage this week (February 7 – 12). The stage musical is very loosely based on the 2005 British film of the same name, which of course, was inspired by the true story of Steve Pateman, who undertook to save his family’s shoe factory from closure by shifting production to fetish footwear for men (hey, why not).

Set in the story’s original location of Northampton, Kinky Boots is a rather formulaic viewpoint of blue-collar types coming together against a backdrop of economic uncertainty. It’s not likely that many in the audience would know that long before the advent of globalization and automation, Northampton was once the footwear manufacturing capital of the world.

Pop phenomenon Cyndi Lauper provides the witty, gritty, pop songs that drive the narrative and American actor and playwright Harvey Fierstein wrote the book. The show is high on slick and low on subtle and at times so flagrantly camp that it resembles a gay pride parade.

However, despite the over-the-top comedy and Ms. Lauper’s spirited, brassy tunes, Kinky Boots does have a few poignant moments. When Curt Hanson and J. Harrison Ghee who play leads Charlie and Lola respectively sing “Not My Father’s Son” they speak for everyone who turned their back on their parent’s best intentions.

The show is definitely at its best when at its most ludicrous. J. Harrison Ghee and his spectacularly decked out “Angels” are an absolute tour de force. They’re joined by a hard-working ensemble. Curt Hanson is excellent when playing the perfect foil to the flamboyant Ghee in the first act, but his performance in the second act is more problematic when his attitude towards his employees, Lola and even his ambitious fiancé goes against type in becoming aggressively contentious.

For the opening performance, Ellen Marlow took over the role of Lauren and more than held her own. Her rendition of “The history of Wrong Guys” was truly awe-inspiring and a potential track on a future Cyndi Lauper album.

Notwithstanding some obvious flaws, the show certainly connects with its audience. It works really well at just being great entertainment – not so much at offering life lessons.