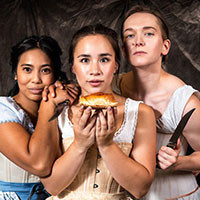 Opening night at the Rio Theatre is always a fun experience for any play they present. The theatre is nestled in the heart of East Vancouver and is a long-standing local institution that shares artsy and electric features across film and theatre. Kill the Ripper was no exception with a healthy turnout of horror and comedy enthusiasts eager to see what the Geekenders had developed.

Kill the Ripper shared the experience of three street working women who fear for their lives with Jack the Ripper’s most recent conquests attacking their sex work industry. Set against a beautiful backdrop of a street corner in Whitechapel, this female led trio, played by Jackie T. Hanlin, Nathania Bernabe and Katrina Teitz, banter back and forth with smart dialogue surrounding their personal financial situations that have led them to the streets along with the frivolous male clientele they encounter who don’t value their worth. The dialogue is interwoven with the story of Jack the Ripper and how the authorities aren’t doing enough to catch him as he preys on this marginalized population that is often overlooked in society.

The trio of women are accompanied by Ben Francis who plays many roles and is somewhat of a clever chameleon as he embodies various characters such as a newspaper boy, police officer and a kinky client looking to pay for sex.

The acting was superb as the female trio bantered off each other’s sentences quickly and wittily. The dialogue was infused with comedy which made the performance to be more light which balanced well against the dark topic of the Ripper. The male lead was very well played where he would use different demeanours to effectively portray the various roles he switched between.

The setting was simple yet effective as it was eerily lit to highlight the street corner where the sex workers looked for customers in the heart of Whitechapel. There were live musicians on stage composed of Alison Jenkins, Masae Day, Shona Struthers, Christina Cuglietta and Anna Mazurik. This orchestra was effective in providing eery yet calming music during the set changes which went well with the tonality of a play speaking to a serial killer. Lastly, the choreography was well done with fighting scenes that were played out as a dance of sorts between the cast.

Kill The Ripper embodies many themes throughout its script, specifically female empowerment, equality and the overall notion of how community should come together during hard times. If you’re looking for a fun night out in East Vancouver, I recommend checking out this play!