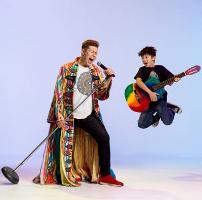 I didn’t really want to see a by-the-book adaptation of the story of Jacob’s favourite son who never got along with his siblings. Didn’t most of us learn the original story in Sunday school? As it turns out, this family-friendly stage musical is antithetical to a bible class. The only similarity that Barbara Tomasic’s version has with the original book of Genesis is that the eponymous Joseph gets to wear a multi-coloured jacket.

Tomasic breathes new life into the 50-year old musical, taking it out of Egypt and through a child’s dream time jumps Joseph’s story from seventh century BC to present day. Almost the entire text is sung, either by cast members or an on-stage narrator. Other than that the production includes costumes and scenery, it could be described as a secular oratorio.

The story, naturally chronicles the life of Joseph, the most famous member of Jacob and Rachel’s extended family. Despised by his brothers who sell him into slavery, he, through his uncanny knack of interpreting dreams rises to a position of power in Pharaoh’s inner circle.

Oliver Castillo takes on the title role of Joseph who is both charismatic and heroic. He sings with flexibility and feeling, particularly in his plaintive, show-stopping song “Close Every Door.” His “brothers” (okay, so six of his brothers are actually sisters for this production) are a group of energetic emerging artists who perform with discipline and focus throughout the ninety-minute show and look like they’re having fun doing it. Their ensemble country music styled “One More Angel in Heaven” was a highlight of the first act.

Chelsea Rose is sensational as the narrator. Sharing the lead with Oliver Castillo, the two bring a fluid musicality to the songs that drive the narrative. Perhaps the biggest revelation is Madeleine Suddaby’s electrifying performance of Pharaoh’s “Song of the King.” Suddaby was a standout performer in a Theatre under the Stars production of Joseph a few years ago and she has since developed into a stellar artist. Young Timothy Liu, in the role of Dreamer, won over the audience for his intelligent movement around the stage and ‘cuteness factor.’

It’s easy to see why this musical has endured; the song’s lyrics are clever and the music well-crafted and it looks a lot of fun to perform. If you go and see it, you’re sure to have fun too – and you won’t get a bible story.