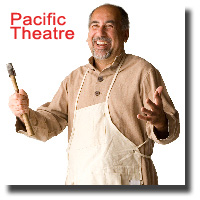 Jesus, My Boy, or to give it its more elucidating subtitle, “The Gospel according to Joseph” is a single-act, one-man play that whimsically chronicles Jesus’ formative years from the viewpoint of St. Joseph.

David Adams in his second ‘real-life’ character role in a little over a month, (Adams recently portrayed Paul Wolfowitz in Stuff Happens) plays the role of Joseph the carpenter as a regular guy who gets mixed up in something way over his head.

Sporting a carpenter’s apron, modern-looking construction boots and a vaguely characteristic Jewish inflection, he delivers a wry, underhanded, conversational style account of the coming of the Messiah, ancient Jewish politics and his misgivings on his public image.

This time the theatre’s seating layout works to the performer’s advantage. Adams appears to be talking up, rather than down to his audience and he keeps the narrative light and humourous. That is until he is more graphic than perhaps necessary in describing the horrors of the Roman methods of crucifixion.

Adams and writer John Dowie do manage to humanise the patriarch of the Holy Family and do it without offending any sensitive believers that might have wandered into the basement theatre from the Holy Trinity Anglican Church upstairs.

Dowie, who himself is a merchant of the ‘stand-up’ routine, does however, play fast and loose with the established teachings. When Adams descants over Joseph and Mary adding to their family with four more sons “coming the normal way,” he throws it out as if it were indisputable fact, yet, no such evidence exists to support this dogma.

The play offers little in what one might have thought to be a central objective; that being to speculate on the impact that Joseph had on his foster-son’s thinking.

On stage musicians Jeremy Eisenhauer and Sheree Plett provide an eclectic two-part harmony soundtrack that is a pleasant mix of klezmer, folk and popular songs. They’re certainly pleasing to the ear, but unfortunately tend to interrupt the continuity of the actor’s monologue. At one point, when Adams recounts Mary breaking the news of her pregnancy, the pair suddenly break into Lennon and McCartney’s “Hey, you’ve got to hide your love away” – a great song, beautifully sung, but hardly appropriate.

Lauchlin Johnston’s set is minimalist but serves its purpose. It largely consists of a roughly constructed staircase that provides access on and off the stage and a workbench with assorted tools that may have been left-over from Pacific Theatre’s previous production.

Jesus, My Boy is certainly amusing, even entertaining and on the whole well-written – one thing it (thankfully) isn’t though, is a bible lesson.