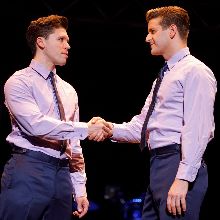 Jersey Boys is a nostalgia musical that centres on the early careers of Frankie Valli, Tommy DeVito, Bob Gaudio and Nick Massi, four guys from New Jersey who made up the Four Seasons and became a pop music phenomenon. By the early seventies all but Frankie Valli from this original lineup had quit the group. Since then, around thirty members have come and gone, with lead singer Valli remaining the only constant.

This touring production is more or less faithful to the well documented ‘obscurity-to-fame’ story of the Four Seasons. It starts with a band named the Variety Trio consisting of only three members with Frankie Valli (Jonny Wexler) just joining as a guest lead singer. Corey Greenan as self appointed de facto manager Tommy DeVito narrates the story of the group’s beginnings.

Greenan takes the story up to the point when Bob Gaudio (Tommaso Antico) joins as the fourth member and the band changes its name to the Four Seasons – a name taken from a bowling alley. According to legend, it was Joe Pesci who introduced Bob Gaudio to the group. Historically, band members who write the songs generally get to call the shots. So it was with Gaudio, who together with Valli whose star power was emerging started to take over the band’s direction – much to the chagrin of De Vito. But when they get their first hit with “Sherry,” petty rivalries are put aside and the boys are on their way.

Considered by many to offer the least contribution to the collective, baritone Nick Massi (Chris Stevens) briefly takes over the narrative at the beginning of the second act. Stevens’ own self-deprecating performance adds to the perception of Massi’s under-appreciated talent. I believe it to be unfair, as he was responsible for many of the group's vocal arrangements. In referring to the group’s ego problems, Stevens has one of the most poignant lines in the show: “when you sell 100 million records, see how you handle it.” Massi eventually leaves the group for vague reasons and died of cancer on Christmas Eve, 2000.

The final segment of the Jersey Boys narrative belongs to Frankie Valli, when, without the support of the other three original members, he steps out on his own. It’s in this part of the show that we get many of the musical highlights as well as much of the drama. Jonny Wexler does an amazing job of his solo show-stopper “Can’t take my eyes off you,” for which he received boisterous applause. Wexler is not Frankie Valli (who else is?), but he comes pretty close and even captures the singer’s signature falsetto. Part of Des McAnuff’s ingenious direction is that Wexler’s voice noticeably changes during the show, from when he performs as a club singer to a polished solo act.

As well as the principal players who are the eponymous Jersey Boys, Dianna Barger, Tristen Buettel and Michelle Rombola also deserve kudos for their comedic, dramatic, and vocal contributions in the numerous female roles.

Jess Goldstein’s slick clothing is evocative of the sixties vocal groups. Michael Gonzalez’s music direction and Sergio Trujillo’s choreography put the performance of the Four Season’s terrific songs in focus. Klara Zieglerova's industrial single set is a basic construction of scaffolding consisting of two sets of stairs leading up to an elevated platform. At the top of the stage, comic-strip cartoons with speech bubbles shown on a video screen were frankly more of a distraction.

Jersey Boys succeeds because while it makes the music the primary focus, it also probes human elements like loyalty, friendship, group dynamics and sacrifice.