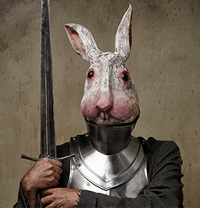 Beware the Jabberwock!
Lewis Carroll’s nonsense poem is the inspiration for the Calgary-based puppet troupe’s Pythonesque puppet show. Four performance artists (I doubt if they would even call themselves actors) Nicolas Di Gaetano, Teddy Ivanov, Pityu Kenderes and Sebastian Kroon turn Jabberwocky Into an intentionally goofy piece of absurd theatre that starts off being comic schtick and ends oddly poignant.

The show has no script and little dialogue, save for Lewis Carroll’s own rhyme that gets served up in scintillating scintilla throughout the seventy-minute run-time. What it does have is an on stage eye-catching contraption that manually provides moving panoramas. It consists of a series of frames holding lengths of painted fabric wound through spools with a crank handle. The apparatus is a throwback to Victorian era theatre when it needed a visual element. Another component of the show’s homage to that era is the use of a plethora of colourful, two-dimensional, light plyboard cut-outs as stage props.

To paraphrase Alice in Alice through the Looking-Glass, The Old Trouts have let Lewis Carroll's nonsense poem ‘fill their heads with ideas, only they don't exactly know what they are.’ While much of Jabberwocky is delightfully whimsical, there are certainly dark elements.

The story (such as it is) takes us into a parallel universe where we meet a dysfunctional family of hares that possess similar physical extremities and gait to humans. Mother hare spends much of her waking hours bent over an ironing board, while Father hare nods off in his favourite chair. Baby hare goes through adolescence in utter confusion and ultimately reaches manhood disillusioned and cynical.

The show works best when less quixotic and more satirical. Whimsy is what The Old Trout does best.