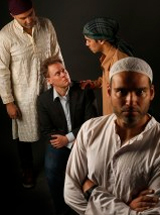 Ayad Akhtar’s taut political drama The Invisible Hand is set somewhere in Pakistan, sometime in the not so distant future. The play’s obscure title is business-speak referring to the natural regulation that keeps the money markets in equilibrium. Aside from the obvious collision of East-West cultural perspectives, Akhtar’s play has elements of global finance and interfaith conflict in the 21st century.

The play begins with middle banking executive Nick Bright (Craig Erickson) mistakenly kidnapped by a renegade band of Pakistani rebels. The original target was Nick’s boss, whom they hoped would be worth a ten million dollar ransom to his employers.

His captors, in order of rank are: Imam Saleem (Shaker Paleja), a scholarly former journalist, now an Islamic leader, Bashir (Munish Sharma), the son of Pakistani immigrants in London who has been recently radicalized and Dar (Conor Wylie), a local lackey.

The resourceful investment banker soon realises that neither his employer nor his government will negotiate with terrorists. So he tries to deal his freedom by offering $3 million they could get, instead of $10 million they will not. When his captors stubbornly insist the price is non-negotiable, he convinces them to allow him use his vast know-how of global markets to earn the ransom. The Imam agrees, however, he preaches one concept of his faith, but practices another.

It takes guile to make the audience care about an American investment banker with dubious ethics, but Craig Erickson manages to pull it off. Munish Sharma doesn’t pull any punches as the thuggish Bashir, showing that he has enough street smarts to be an astute protégé. He even nails the working class London accent.

Shaker Paleja and Conor Wylie have less to do, but nonetheless provide stellar support as the revolutionary zealot and the second-rate schlep respectively.

David Roberts ingenious set seamlessly switches from the cement hut in the first act to a more conventional Pakistani home in the second act. The floor extending from a single wall gives the guise of the audience being confined to the same room as the characters.