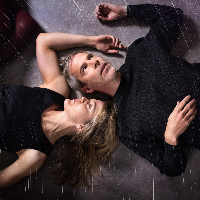 Why is the human race so consumed with the observation and measurement of time? Time, as a scientific construct invades Canadian playwright Hannah Moscovitch’s multi-layered family drama by way of one of the character’s research into quantum field theory. Director Ross Manson uses a time device in using two separate timelines to chronicle the growth of Elliot and Carmen Green (Jonathon Young and Amy Rutherford) and their only child Sarah Jean (Emily Jane King); individually talented people, each with their own specific neurosis in a dysfunctional family.

Moscovitch’s intriguing play is essentially Sarah Jean’s story. Though not apparent until nearly half way through the performance, her neurosis, which might even border on autistic spectrum disorder, is a direct result of her parent’s hang ups. Elliot is a physicist with a monomania for writing his PhD thesis on ‘the theory of everything’ at the exclusion of family responsibilities. Carmen is a musician with a special gift of classical composition who is frustrated by her husband's lack of attachment.

Sarah Jean is a sexually voracious young woman with an academic approach to love. The backwards-forwards narrative of her intellectual development is initially confusing, since she doesn’t share the stage with Rutherford and Young until about forty into the show; then as a precocious eight-year-old.

Emily Jane King delivers a totally believable performance as the emotionally confused Sarah Jean. Jonathon Young’s performance as the self-absorbed Elliot is particularly masterful. I found myself simultaneously despising and lauding him. Amy Rutherford anchors the show with an intelligent reading of the role of Carmen.

It’s unusual to find a theatre production acquiring the expertise of a consulting physicist, but Hannah Moscovitch wisely doesn’t allow scientific mumbo-jumbo to overwhelm the audience.

Moscovitch’s Infinity is much like her fictitious Green family. All the components taken separately: acting, staging, musical direction - are brilliant. Collectively, I found thethan the sum of its parts less satisfying.