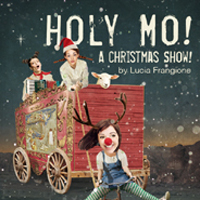 When the title of a play includes two exclamation marks it’s a fair bet that a considerable component will be irrelevant. The premise of Lucia Frangione seasonal play Holy Mo! A Christmas Show! is quite novel, and while outlandish, the production is felicitous to those that Pacific Theatre typically supports.

The show’s primary focus (if indeed it even has one) is the two thousand year old story of the Nativity as seen by Follie, Buffoona, and Guff, a quirky trio of travelling performers. The original idea for the play came to Frangione about twenty years ago when she contemplated doing a bible story that would be short on funding and fact, but long on fun and festive. Holy Mo! A Christmas Show! certainly matches those criteria.

When you have what is essentially a revue within a play, where roles are assumed by characters rather than the actors, the action will tend to feel like it is mostly improvised. The mainly physical comedy comes about by each of the trio having their own ax to grind. Follie (Lucia Frangione) prefers to keep it traditional, Buffoona (Jess Amy Shead) wants to introduce modern elements like Santa Clause and pantomime characters. Guff (Anita Wittenberg) takes on the role that is the most characteristic of a clown.

Director Kerry van der Griend wisely maintains a loose reign, allowing the performers to take the show where they will. The show’s theatricality ranges from madcap to thought-provoking, and from one moment serving up weightless comedy to the next moment offering germane sapience of the messianic prophecy.

Lucia Frangione drives her own wacky narrative without dominating her co-actors. The scattered narrative gets extra explanation during the course of show with a few nicely crafted songs performed by the dynamic trio. Throughout the show (if your ear is quick enough) you will hear celebrity quotes from: Gwyneth Paltrow (“conscious uncoupling”), Matthew-McConaughey (“All right, all right”) and occasionally – the Bible.

Anita Wittenberg, a long time collaborator of the playwright performs her many supporting roles with aplomb; even taking to warming up the audience before the second act. Jess Amy Shead has no problem keeping pace with the veteran performers. She is audacious as the ructious ‘Puss in Boots’ and thoroughly charming as the philosophical Magi.

Holy Mo! A Christmas Show! is deliciously camp – but it ain’t no bible lesson.