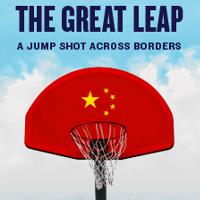 The Great Leap by Lauren Yee

The Great Leap is Lauren Yee’s cross-cultural play that attempts to be both a comedy and a sports drama. The play’s title might seem somewhat trite for a play that uses basketball as a metaphor for the individual and collective pursuit of success and acceptance. Though in fact, “The Great Leap Forward,” referred to by one of the play central characters is also a political term. An ideology that even Chinese historians admit was an unmitigated failure. Under Chairman Mao, the Chinese government put their faith in their vast resources of unskilled manpower to advance industrialization.

Yee’s play is placed in San Francisco, California and Beijing, China in 1989. At the storyline’s centre is an exhibition basketball game between college teams representing the two cities. The game reunites the team’s respective coaches: Saul (Toby Berner) and his former protégé Wen Chang (Jovanni Sy). One of the play’s early scenes shows the pair in an eighteen year flashback when Saul visits China to coach a Chinese basketball team and Wen Chang is assigned as his translator.

The other two characters are Manford Lum (Milton Lim), a Chinese-American basketball player who tries to force his way into Saul’s college team and his “cousin” Connie (Agnes Tong). Connie has studied in Beijing on a foreign student visa and attempts to dissuade Manford from going to China. There is a fifth unseen character that links Manford with Wen Chang.

Notwithstanding the essential premise, the play is set against a (factual) backdrop of student protests in Beijing, known in China as the June Fourth Incident, where under the leadership of Deng Xiaoping, martial law was declared. This ultimately led to what would become known as the Tiananmen Square Massacre.

Despite some convincing performances by the four actors - Toby Berner’s character is especially colourful and provides much of the show’s humour – the play is cram full of clichés of the underdog-winning-against-all-odds and regrets about the-road-not-taken. The predictable end stretches suspension of disbelief to the limit.

Heipo C.H. Leung’s set of a white surface, scaled down basketball court is actually a giant floor-mounted multi-media device. The performance environment relies on Chimerik’s slick electro-acoustic music and digital technology with real-time performance software. The white surface is programmed to turn black when basketball court markings are projected onto the floor.

You won’t need to be a basketball fan to enjoy this lively Artsclub production, though it would certainly help. You will definitely be blown away by the technology