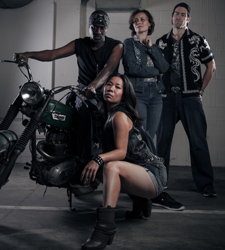 Pacific Theatre
A Good Way Out by Cara Norrish

Pacific Theatre opened their new season with a first ever public performance of Cara Norrish’s urban drama A Good Way Out. The first thing that catches your eye, even before taking your seat, is a vintage 250 Triumph motorcycle propped up in the middle of the stage.

The bike in a strange way becomes a metaphor for the protagonist’s acheronian story. The bike is in pretty rough shape and while it gets plenty of attention, never actually gets fixed. Joey (Carl Kennedy) is a useful mechanic and also a member of a biker gang led by the boorish Larry (Andrew Wheeler). But now Joey is a member of another ‘family.’ He has a young son with his girlfriend Carla (Evelyn Chew), a former exotic dancer with a reputation for providing more than the odd lap dance.

Joey is “between a rock and a hard place” with both financial and family problems escalating: an eviction notice from his landlord, an already onerous relationship with his sister Lynette (Corina Akeson) is deteriorating, and child protection authorities are questioning parenting skills. Joey is looking for a way out, but what would seem to be the easiest way out is not the smartest.

Director Anthony Ingram guides the playwright’s story into a realm that likely neither he nor the audience is especially familiar with. The hierarchy in criminal gangs that deal in drugs and prostitution is a code onto itself. The play’s narrative, offers an believable insight into the ruthless business of organised crime, showing us that not everyone involved benefits from the proceeds.

The casting of Washington native Carl Kennedy in the role of Joey is both inspired and audacious. The black American actor at 1.9 metres tall certainly stands out on a small stage with a predominantly white cast - attributes that he played to his advantage.

Andrew Wheeler turned in solid performance and never looks for sympathy as a repugnant gang boss. Corina Akeson and Evelyn Chew are inconsistent in what appear to be difficult roles. Chew seems particularly miscast as ‘tough-as-nails’ Carla. The cast is rounded out by Chad Ellis who is pretty convincing as the gang’s wastrel.

There isn’t much humour in this season opener, but if you like theatre to be gritty and hard-hitting – this might be for you.