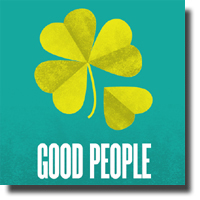 Set in the blue collar neighbourhood of South Boston as well as the affluent village of Chestnut Hill, Good People is David Lindsay-Abaire’s semi-autobiographical play about tough times in a tougher town. The title is less a description of the play’s characters, who are anything but good people, but rather a Bostonian idiom given to a group, family or individual implying ‘you’re okay.’

Margaret Walsh, the play’s protagonist is the proverbial ‘trainwreck’ who is just a single paycheck away from being destitute, and whose investment portfolio consists of losing bingo cards. Margie (pronounced with a hard ‘g’) as her bingo buddies call her, is pretty hard to take. She brazenly admits that “breaking balls is what I do.”

In the very first scene she is doing just that to her supervisor at the Dollar Store where she works for a dollar above minimum wage. By virtue of Margie being a single mother with an adult handicapped daughter, Stevie (Ben Elliott) is reluctant to terminate her for persistent tardiness because he knows that it’s not entirely her fault. But Margie’s belligerence doesn’t give Stevie much margin for sympathy.

Lindsay-Abaire’s play is primarily composed of five conversations in five separate locations over the course of a week. Subsequent to getting canned, her quest for gainful employment first takes her to friends Dottie and Jeanne (Patti Allan and Jenn Griffin) who offer dubious advice.

She then checks out an ex-boyfriend who grew up in the old neighbourhood and has since made it as a successful fertility specialist. Margie is hoping for a lead to prospective paid work, but their plodding exchange alternates between amicable and acrimonious. Mike (Scott Bellis) grudgingly invites her to his birthday party where it is hoped she will latch onto a few useful contacts. But when Mike cancels the next day for vague reasons, she suspects she is being blown off and turns up anyway.

The normally classically chic Colleen Wheeler is intentionally dumbed-down for the role of Margaret, onstage for almost the entire show. It’s a difficult role and Wheeler’s talent for comic timing is a valuable asset. However, I found her overall performance somewhat uneven. The complexion of Margaret’s character appears to alter depending on who else was in the scene.

Good People might just be more than a “Have - have not” socio-economic essay. Wealth does divide us, but the play helps us see that perhaps a person’s true worth is appreciating the value of the gifts they are given.