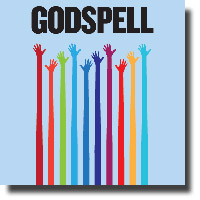 Godspell first surfaced Off-Broadway in the early seventies. It’s pure musical theatre that at its structural core is a non-linear, secular approach to the telling of Scripture parables. Loosely based on the Gospel of Matthew it’s interspersed with anthemic songs with spirited melodies.

Sara-Jeanne Hosie’s updated direction is more, well, off-the-wall than the original version. Costumes are conventional and less colourful. Gone also is the inner city set and replaced by a railway station – not just any railway station, but the one in Jerusalem (not an exact replica). Hosie has also abandoned the classic device of the characters' names taking the first name of the actor. Moreover, the director bravely goes against canon by including female performers in the roles of Jesus and John the Baptist.

Jennifer Copping plays a fervent Jesus, Aubrey Joy Maddock, the youngest cast member steps up to play a gung ho John the Baptist and Andrew Cohen as a deferential Judas are the only actors to have their characters identified with the Gospel. The rest of the cast assume names that distinguish their place in the community like: the nomad, the busker, the student etc.

The good news is that it actually works. Godspell is obviously one of those stage musicals that can be re-imagined to suit any venue and just about any style, since its success relies on the exuberance and spontaneity of its cast.

It’s a little slow getting started, with a dozen strangers hustling through a busy rail terminal, hardly aware of anyone’s existence, but their own. The cast eventually break out in the choral a capella “Tower of Babble.”

Jennifer Copping is such a natural Jesus, that by midway through the (lengthy) first act I stopped noticing the female pronoun references. She conveys the simple parables with 21st century attributes. For instance, the ‘Rich Man’ parable was told in the context of a yoga class.

Godspell is essentially an ensemble piece, and cast members were so uniformly talented it was difficult to single out any performer as a standout. Although, Aubrey Joy Maddock distinguished herself as an instinctive performer and recent Capilano University performing Arts grad Lindsay Warnock gives an affecting rendition of "By My Side" – one of show’s best songs.

After four and a half decades Godspell can still hold its own. Okay, so it gets a little preachy in some parts, but the show still delivers its message of kindness, brotherly (and sisterly) love and tolerance.