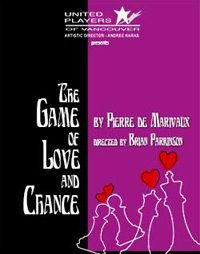 Upper classes disguised as servants and servants pretending to be their masters and mistresses have been a staple of English drama since Shakespeares time. Tranio and Lucentio, planned to wive it wealthily in Padua, Kate Hardcastle checked out young Marlowe to see if he would make a good husband. But the French have as long a history and in Pierre de Marivauxs Game of Love and Chance (Le Jeu de l'amour et du hasard, 1730), the stakes are doubled as both the well-born Silvia (Elizabeth Willow) and her fathers choice of suitor, Dorante, (Callum Gunn) exchange places with their servants in order to sound out the true nature of their intended. (Sylvias descriptions of the unhappy marriages of some of her friends is as apt today as in the 18th century.)

Apart from the obvious dramatic possiblilities, this subterfuge says something about the fact that until relatively recently, many individuals knew very little about the people they were marrying. And it offers a playwright wide scope to examine class differences. Translator and adapter, Nicolas Billon has transposed the setting to 1920s Quebec, when an upper crust Canadian family might still steer a daughter to a suitable young man from their circle. Class differences would have been very clear.

Manners and behaviour are one of the touchstones of class distinction and good manners set the story moving. Orgon (Peter Robbins) has had a letter from his old friend, Dorantes father, who felt it only polite to let him know that Dorante and his valet, Bourguingon (Matt Loop) will be visiting and have exchanged places. Co-incidentally Sylvia dutifully asks him if she can switch with Lisette, her chirpy maid (Rebecca Husain). Orgon naturally agrees, but without telling Sylvia about Dorante. He does share the secret with his son, Mario, and the two of them gleefully watch the couples in action and give the plot, such as it is, a stir from time to time.

Elizabeth Willow and Callum Gunn exude private school deportment and good breeding, even while pretending to be servants. Willow is perhaps at her best confidently arguing with her father. Gunn is genuinely angry at Mario for allegedly flirting with Lisette. But it is clear from their first look that they are made for each other. Matt Loop and Rebecca Husain as valet and maid throw themselves into their new roles as Sir and Miss with over-the-top enthusiasm and not much finesse. Loop preens and pratfalls. Husain is especially hilarious as she entices Bourguignon, as per her orders from Sylvia and is enticed by him, as per her own heart. Acting in disguise as another character is a technical challenge competently handled by all four actors.

Simon Garez is thoroughly irritating as the obnoxious brother, Mario, and Robbins is gently amusing as father-knows-best Orgon.

Sandy Margarets spacious set is highlighted by flower arrangements suggesting both 18th and 20th century elegance and affluence. The stylish 1920s clothes designed by Linda Begg are insouciant, like the play, which moves quickly along under Brian Parkinsons clear direction.