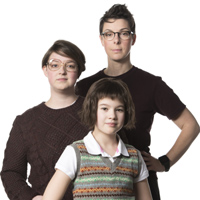 Fun Home is a memory play scripted by Lisa Kron, and adapted from Alison Bechdel’s autobiographical graphic novel. The title is sardonic, since it would seem there isn’t all that much fun in this home. It’s a coming-of-age story presented as a musical tragedy (if that seems like an oxymoron, well, that’s really what it is).

Alison Bechdel’s family memoir puts her father Bruce as well as herself as the main protagonists. Bruce (Eric Craig) is a tortured soul – a dutiful, though emotionally detached father – and a closet gay man. He works as a full-time high school English teacher, a part-time undertaker and in his spare time he is his own reno contractor. But if his professional and business life is amorphous, his personal life is internally chaotic.

Because much of the early action is in flashback, the role of Alison Bechdel is shared by three actors covering: childhood, college years and as an adult. All three have bad hair cuts, though, with Jaime MacLean, who plays the nine-year-old Alison, she wears a wig that doesn’t quite fit.

Sara-Jeanne Hosie who plays adult Alison is omnipresent on stage, though, mostly as an observer in the background working on creating the cartoon panels that will become the kernel of this play. It’s only in the final scenes that she takes over the role exclusively. In her last conversation with Bruce she delivers a poignant rendition of “Telephone Wires,” as she struggles to have a meaningful dialogue with her father.

Between MacLean and Hosie, Kelli Ogmundson plays Alison in her college years. The three Alisons not only share the role of a single character, but frequently share space in the same scene. Both younger versions of Alison deliver a spirited and mature performance. However, Ogmundson has the more complex role, who, with the help of Sara Vickruck as her more self-assured lover Joan, expresses a sexual awakening in singing “I’m changing my major to Joan.”

Eric Craig as the remote father and husband certainly has the most difficult role. He manages to bring genuine pathos, and never asks or gets sympathy from the audience even in his plaintive final scene delivering the show’s final song “Flying Away.”

The other two children (Glen Gordon and Nolen Dubuc), who play Alison’s rambunctious young brothers Christian and John respectively, and along with Jaime MacLean, received the loudest applause, for their mischievous Jackson parody on “Come to the Fun Home.”

Amir Ofek’s tidily detailed set of the Bechdel home, that incorporates adult Alison’s remote drafting table that is transparent to the rest of the cast, provides a quality visible feature. The musicians are only partly concealed through a clever use of a scrim that doubles as wallpaper.

As a stage musical, Fun Home is very different from traditional musical theatre that has come up from the ‘Great White Way,’ but in terms of boldness and intelligence, is no less affecting.