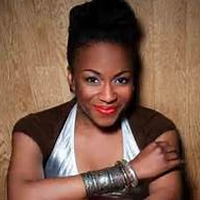 Detroit-born musician Khari Wendell McClelland, along with co-creator Andrew Kushner, has put together a show that includes elements of concert, performance art and a history lesson. Where McClelland, ably supported by singer Tanika Charles and guitarist Noah Walker, shines through the most is with the music. The roots gospel singer, now based in Vancouver, delivers numbers that straddle blues, traditional spiritual, hip-hop and protest songs.

Occasionally accompanying himself on his ukulele guitar, but most of the time leaving instrumental accompaniment to Noah Walker’s Gretsch electric guitar, he kicks off the musical component with “Sometimes I Feel like a Motherless Child” – a song dating back to American slavery, that is given a blues treatment.

McClelland then embarks on a journey of genealogy, searching his heritage back to his maternal great-great-great-grandmother, Kizzy, going to write her name on the A-frame staging and asking the audience to repeat her name. Kizzy apparently escaped slavery sometime around 1850, ending up in Ontario, Canada via the legendary Underground Railroad. After finally making it to freedom, she married a British ex-pat, but was abandoned with their two children, ultimately having both legs amputated as a result of severe frostbite.

Freedom Singer’s bold narrative should be heard by all Canadians – and I really believe that most have already learned about the courage of those that have travelled that arduous journey to (relative) safety. As a lesson in bi-lateral history, the show is a little disappointing. In his conversations with recorded voices of historians and curators, McClelland takes a rather cynical tack. Also, in one of the more humourous moments of the show, Tanika Charles wittily re-enacts a CBC Heritage Minute (the one about the Underground Railroad), the show’s creator challenges the CBC’s sincerity.

Of Freedom Singer’s own sincerity, there is no doubt. At one point in the show, McClelland invites members of the audience to share the name of someone important to their heritage and humanity. He gets the audience on his side when he relates his personal story in coming to Vancouver, leaving behind what he considers a belligerent atmosphere in Detroit.

With a new underground passage taking shape between Canada and the US, the artist’s message is certainly topical and it’s always valuable to learn from past mistakes. All the dialogue and song lyrics in the show were translated into American Sign Language.