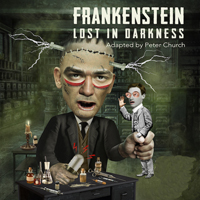 Mary Shelley's mythic story of Dr. Frankenstein and his ungodly creation has always been acknowledged as a cautionary tale. When mankind tries to play God, chaos can, and usually does result. What you get in this Pacific Theatre production of Peter Church’s adaptation is less graphic horror, but more humanity. Presented in a live radio broadcast format, there are no period costumes, no garish make-up or even a “bolt through the neck” (à la Boris Karloff). The set, such as it is, is put together as a typical sound studio at any radio station with clusters of microphones and sound effect gadgets randomly strewn around.

What the production lacks in production value it certainly makes up for with an intelligent retelling of the story that guides the audience’s collective imagination. It’s not difficult to somehow see the 5’-9” Tariq Leslie’s Creature as “all of eight feet tall.”

Director Chris Lam goes with what is becoming a modern theatrical cliché of putting a female actor in a traditional male role. Corina Akeson is appropriately defiant as the voice of misguided Victor Frankenstein, though, she hardly figures until halfway through the first act. The first twenty minutes belongs to Tariq Leslie as we follow the Creature’s progress from his first stumbling steps to his discovery of language. Leslie navigates the role with the use of two microphones: one equipped with a modulator for the Creatures auricular voice, the other for his inner voice (thoughts).

Matthew Simmons and Diana Squires, who are only described in the program as ensemble, provide the white noise sound effects and fill in for incidental characters. Although, Squire’s handling of the role of Frankenstein’s fiancée Elizabeth is quite substantial.

In the second act, there are a few instances when the dialogue lapses into bathos. Elizabeth’s petitions to Victor regarding his solitude is supplicating, but is rebuffed by her fiancée’s compulsion.

Church’s adaptation of Shelley's iconic novel calls into question who the real villain is: the loathsome Creature or the deranged scientist.